1. Justin Trudeau with friends in Ukraine. 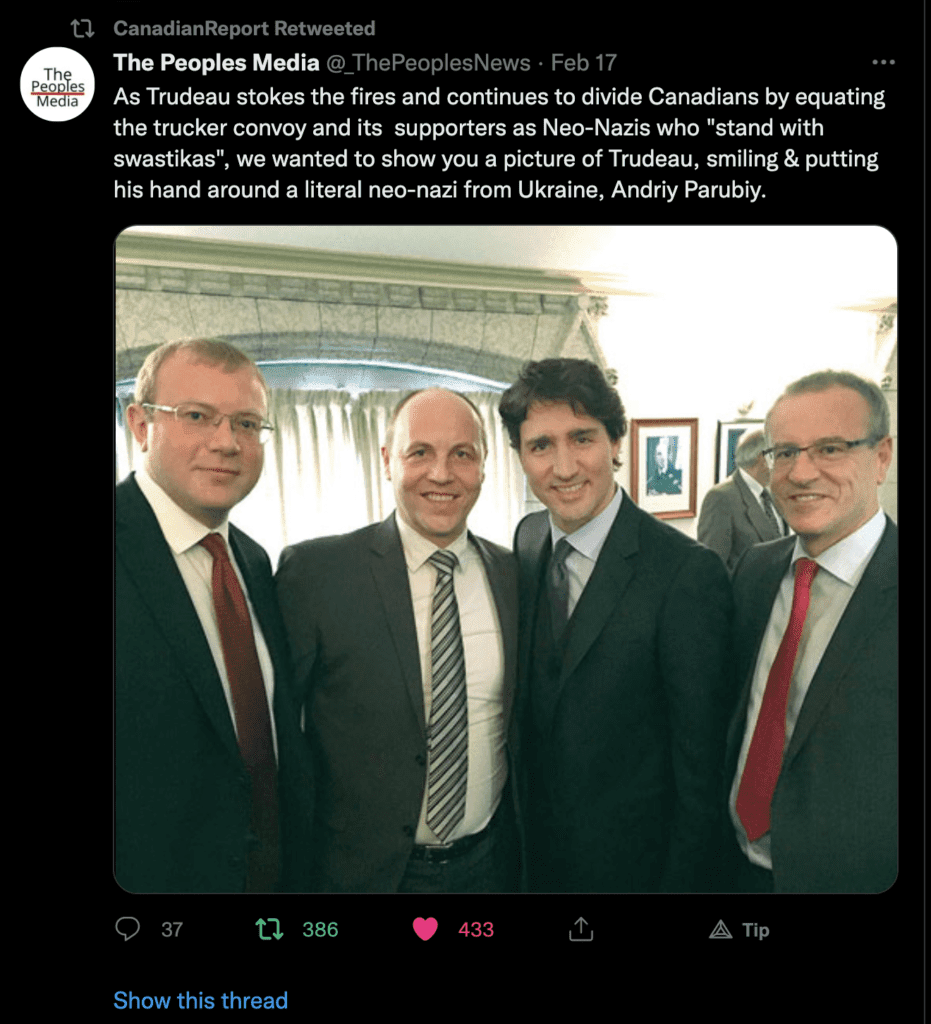 (This might be a good time to mention that Lenin’s party in Russia was called, “The Social Democrat party, much like the communist core of the US Democrat party. is called, “The Democrat Socialist of America, DSA party. In that spirit, Trudeau’s friend in Ukraine called his party, The Social Nationalist party, like the Nazi party which is a condensate of NAtionale SoZialIsten, National Socialist Party. Let us not be ambiguous about this man’s beliefs. It also helps to understand that the difference between communists and Nazis was, at the time Nazis ruled Germany, so small that their #1 ally was communist Russia, and remained so till Hitler attacked Russia. Also at that time, the US Left was fully in support of Hitler, as they were socialist, right till they attacked Russia. Please see the video below on the nature of the Nazis. If this isn’t convincing, please find Hitler’s speeches at Nuremberg where he explains that the way going forward, is Marxist. Class war etc. etc.)

2. Facebook now OK with Nazis, and encourages violent posts. So long as its all directed against Russia

Please check back over the course of the day, here, and the comments. There is a lot more on this all ready to post but one has to hit Publish sooner or later.

On Thursday afternoon, President Vladimir Putin rang the Turkish President, Recep Tayyip Erdogan, and told him what Russia’s precise demands were for a peace deal with Ukraine.

Within half an hour of the ending of the phone call, I interviewed Mr Erdogan’s leading adviser and spokesman, Ibrahim Kalin. Mr Kalin was part of the small group of officials who had listened in on the call.

The first four demands are, according to Mr Kalin, not too difficult for Ukraine to meet.

Chief among them is an acceptance by Ukraine that it should be neutral and should not apply to join Nato. Ukraine’s President Volodymyr Zelensky has already conceded this. […] Ukraine would have to undergo a disarmament process to ensure it wasn’t a threat to Russia. There would have to be protection for the Russian language in Ukraine. And there is something called de-Nazification.

(A commenter observed, if there are no Nazis in Ukraine, this should be easy to do. Other reports however, suggest that the Azov battalion, unabashedly Nazi, is pretty large and influential, and Ukraine will probably need Russian help to get rid of it since, well the US trained them.)

4. The UN first demands that the bio-weapons facilities in Ukraine be kept safe, then denies they exist.

Russia on Friday demanded that Google stop spreading what it labeled as threats against Russian citizens on its YouTube video-sharing platform, a move that could presage an outright block of the service on Russian territory.

The regulator, Roskomnadzor, said adverts on the platform were calling for the communications systems of Russia and Belarus’ railway networks to be suspended and that their dissemination was evidence of the U.S. tech giant’s anti-Russian position. It did not say which accounts were publishing the adverts.

6. Interview with Jeff Nyquist: A worthy video with another perspective on Russia and the world.