1. The Lancet continues its toboggan run into post modernism and destruction of taxonomy

2. Link to an interview with an ICU doctor in the US, who quit over the mRNA injection. This doctor HAD Covid and recovered. So this is not about immunity.

This is a very interesting interview as she gives a clear explanation of what makes Covid a distinct entity from other diseases. Which is refreshing to hear frankly.

New York City’s COVID-19 vaccine mandate for teachers and other Department of Education staffers is on pause after a federal judge late Friday granted a request to temporarily block it.

Plaintiffs, a group of teachers, asked for a temporary injunction pending review by a three-judge panel on the U.S. Court of Appeals for the Second Circuit.

The panel will now decide whether to impose an injunction pending appeal or allow the mandate to take effect.

Rachel Maniscalco and three other New York City Department of Education workers sued over the mandate, which was supposed to start on Sept. 27.

4. Analysis of why the Oz police behave more like the Wicked Witches than the Munchkins

As Germany’s elections inch closer, one TV channel has jumped the gun by displaying vote projections on a news ticker days before the poll. Drawing concern and mockery, the broadcaster apologized for the false start.

German broadcaster ARD’s Das Erste (‘The First’) television network gave its viewers an unlikely glimpse into the future on Friday, having shown projected results of the historic election that has not yet taken place.

(Below is an image of a tweet that Twitter has now removed. But I did see it yesterday before they removed it, and it is legit.) 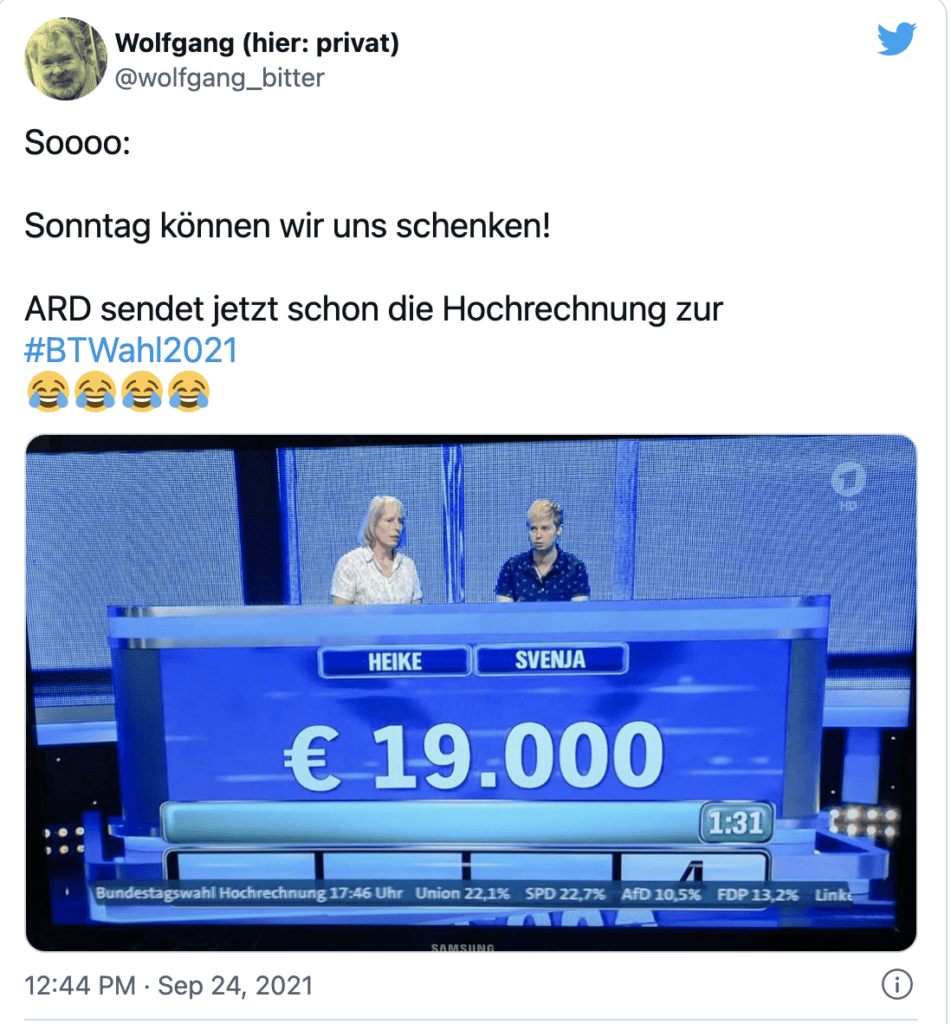 Note how the have the AfD lowest. This is gonna be a fair election just like US, Canada and Austria was when they had to redo it because of all the fraudulent mail ins.

Thank you all who contributed to this effort this weekend. There is a lot more to post.

Please consider downloading this letter to the College of Physicians and Surgeons of Alberta on mandatory mRNA vaccines mandate for Alberta physicians.

While reading, ask yourselves if during any pandemic or medical crisis in history, a large percentage of qualified and caring medical staff was fired. Ever.

5 Replies to “Charting the use of health to push the world into Authoritarianism: Links 1, September 26, 2021”