(There was also the entire set of M*A*S*H on the parking lot of at least one Toronto hospital which from what extremely few reports we saw, also did not have a single patient. Yet they flew a bunch of Covid cases to Ottawa hospitals. Its a good thing Ford is a conservative or we would never have known about this from the CBC) 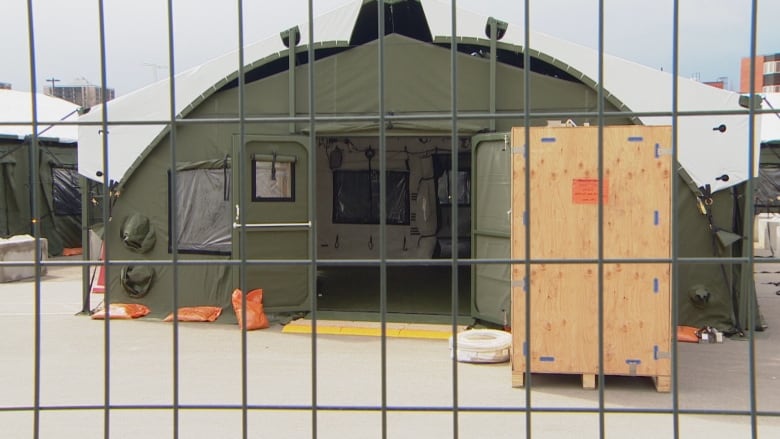 Hamilton Health Sciences (HHS) is taking down its field hospital after never getting a chance to use it.

In a staff memo on June 30, the hospital network said the Ontario Ministry of Health ordered HHS to decommission the field hospital, effective immediately. HHS expects to have it down by early September.

“A tremendous amount of work went into planning, constructing, staffing and equipping the state-of-the-art Hamilton Mobile Health Unit to ensure it was ready to receive patients from across Ontario if needed,” read the memo.

“Hundreds of people were involved, and HHS is proud to have been part of this pandemic response initiative, along with our local, regional, provincial and federal partners.”

Aerial footage of the parking lot MASH set from article

Here is a link to the actual event where Chris was speaking.

Is this some large, grim joke? Is the heritage ministry now a journalism school?

During the days of darkness, as fervent Liberals like to recall the premiership of Stephen Harper, one of the heaviest bludgeons used against Mr. Harper’s government was that it was close and tight-lipped, choked off information flow, and even “muzzled its scientists.”

The Liberals gravely deplored what they painted as Harper’s secretive ways and hostility to the media. Naturally they promised, if elected, they would be limpid to the point of utter translucence, allies not enemies of the press, leaving reporters not only free to do their jobs but given every possible assistance. Short of taking them to lunch and giving them a hand with their copy.

We know that mirage faded once they were elected. If anything they aped what they condemned, and advanced the art of news containment well past their deepest fantasies of Stephen Harper’s appetite for information control.

4. This reads like one of those things that is true even if its not true as presented.

From one of my favorite readers. Fact check: truuuue pic.twitter.com/MABeWsZwxN

5. Best way to prepare for a hurricane according to FEMA? Get a covid shot!

(We think a bug-out back with HCQ and Ivermectin, Vit. D and Zinc is better. Then you prepare for a LOT more likely problems after a hurricane like parasites and malaria.)

Thank you M., PC., Johnny U., Hellequin GB., Michelle, Sassy, ET. and MANY more who stay focussed when oceans of informational sewage are heaped upon us.

For those of you who do not think in terms of a spiritual war, this poem by Karl Marx may help to add clarity:

“I plunge, plunge without fail
My blood-black sword into your soul.
That art God neither wants nor wists,
It leaps to the brain from Hell’s black mists.
Till heart’s bewitched, till senses reel:
With Satan I have struck my deal.”

Marx also dedicated a book to Satan, as did his acolyte, Saul Alinsky.

This is a spiritual war, even if these agents do not exist at all. Imagine a war between warring factions of Vikings, believers in Odin and followers of Loki. Each would draw instructions based on the nature of these archetypes and manifest those behaviours. The war would be real, the consequences of each faction winning would be real, and the quality of life of people under control of the believers would be real. The corporeal existence of the symbols mean nothing at all.

Marxism is not anti-religious, except where it works to be anti-Christian. No Marxists are burning mosques down because of Islam’s systemic human rights abuses. But across Canada now, Churches are in flame under the beard of abuse of Amer-Indians, far enough in the past that no one is still alive to refute it. These Churches are most decidedly being burned by leftists, and encouraged by leftists in positions of power within government.

In the Soviet Union, there would be street theatre written and performed to humiliate Christians and Christianity.

As time passes, the distinction between Satanism and Marxism appears to be only that Marxists are much better at actually implementing Satanic principles to increase suffering and invert and pervert justice and reason, while Satanism seems more like a kink.

Retired judge, Brian Giesbrecht of the @FrontierCentre wrote a well thought perspective on the Kamloops Cemetery: “The dead should be appropriately honoured, but be mindful that some opportunists will exploit these dead children…”https://t.co/VSyAoa9d1s#ONPoli #CDNPoli