1.A good lesson for all the white teachers forcing Marxism on their students. They are feeding the crocodile so it will eat them second to last.

(It’s fun to hear these totalitarian censorious bastards talk about an open culture with secret security measures and “zero tolerance” all in the same minute. One of the things about the left that is so stunning, is how they can constantly be talking about how they are the open, anti-hate ideology with zero tolerance for everything not a bullseye in their world view, and no one blushes or even giggles a little about that)

3. Chinese military ‘engineered mice with humanized lungs’ in 2019 to test viruses on them – just months before the pandemic erupted

Medical researchers with the Chinese army engineered mice with humanized lungs in 2019 to test viruses on them, it has been reported.

The mice, developed using CRISPR gene-editing technology, were mentioned in an April 2020 study which researched their susceptibility to SARS-CoV-2, the virus that causes the COVID-19 illness, Vanity Fair revealed in its bombshell investigation.

Of the study’s 23 co-authors, 11 of them worked for the Academy of Military Medical Sciences, the medical research institute for the Chinese army.

Investigators with the U.S. National Security Council, researching the origins of the pandemic, determined that the mice referenced in the study were created in the summer of 2019 – just months before the emergence of the pandemic.

The National Security Council investigators also reportedly believed they had ‘uncovered important evidence’ supporting the theory that COVID-19 had leaked from a lab and began reaching out to other federal agencies, Vanity Fair reported.

4. Canadian Medical school sent this non-Covid related memo to all students. Just in case you don’t think a medical school would be taking sides in this dispute. 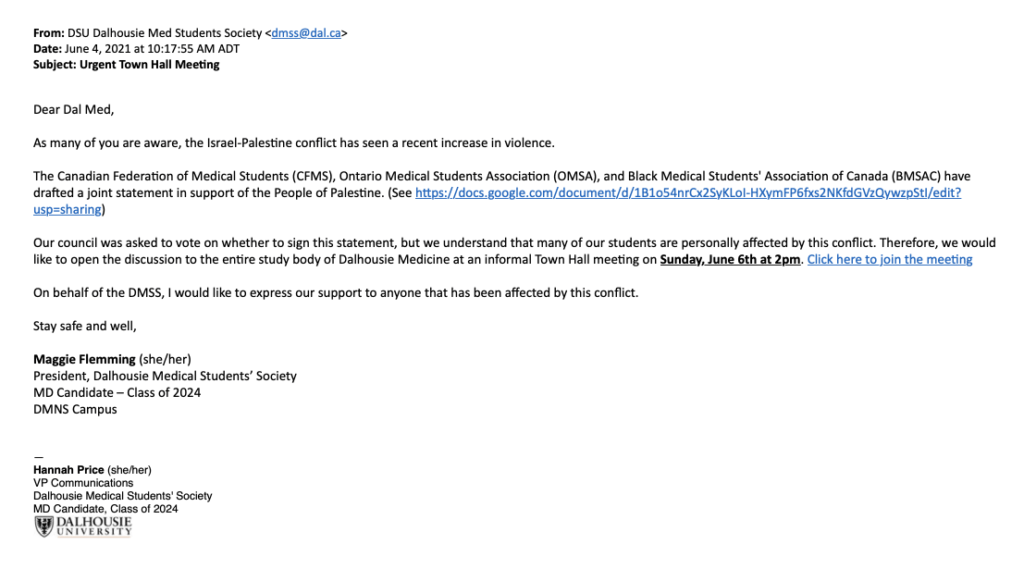 5. The good news is, if you want to be free of Covid restrictions and regulations, you just have to choose the right side. At least while you are seen to be supporting that side.(

FREDERICTON, N.B. – The leader of New Brunswick’s Green Party is doubling down on his attendance at an anti-Israel event, held in breach of provincial health orders, where attendees used antisemitic and pro-Hamas rhetoric.

David Coon, whose party holds three out of the 49 seats in the provincial legislature, addressed an anti-Israel protest outside Fredericton City Hall on May 16. He can later be seen standing in the crowd as they chant: “Israel is a terrorist state!” At least one sign displayed at the protest states: “One Holocaust does not justify another.”

The International Holocaust Remembrance Alliance’s Working Definition of Antisemitism – which the New Brunswick legislature adopted on March 25 of this year – includes “Drawing comparisons of contemporary Israeli policy to that of the Nazis” among its examples of antisemitism.

Coon also appears to have knowingly violated New Brunswick’s COVID-19 health measures in attending the protest. Outdoor gatherings in the province are limited to 50 people, but CBC reported that more than 150 people attended the Fredericton protest.

(We can probably take comfort though, that since the CBC is saying there was 150 people, which would be 100 people over regulations for “Covid19”, its probably in reality barely enough for a Bridge game. So in reality where the non-CBC world operate, they were likely well inside the regulated amount.)

6. Because this would be 100% consistent with the way things generally are now…

Revered scientific journal The Lancet has created a ‘task force’ to investigate the origins of the coronavirus that caused a global pandemic, yet it has decided to employ as its leader the very guy who funded the dangerous gain of function research at the Wuhan lab and subsequently allegedly ‘bullied’ other scientists into avoiding looking into the lab as a potential source of the outbreak.

In the wake of renewed scrutiny of the lab leak hypothesis, the Lancet’s task force will reportedly “focus on analyzing data on all of the theories put forward on the origins of COVID, on the reasons why SARS-CoV-2 was able to break out of Wuhan and spread globally, and on the most plausible strategies to prevent future pandemics.”

It also states that “The Task Force will review thoroughly and objectively all publicly available evidence, particularly the peer-reviewed literature, and conduct interviews with key leaders in science, medicine, policy and civil society.”

Dr Peter Daszak, who is heading up this task force, is perhaps the least suitable scientist on the planet to objectively analyse the data, given his track record.

Daszak, as President of the EcoHealth Alliance, shovelled at least $600,000 to the Wuhan Institute of Virology in the past few years to play around with coronaviruses inside the lab through the now infamous ‘gain of function’ research.\

Daily Mail has a LOT more detail here as well.

Thank you M., Pym Purnell, Johnny U., Malca, EB., ML., Richard, Rich, PC., Kalloi, and MANY more for your enduring work to try and parse reality from firehosed nonsense.

I gotta go with this guy…