2. CNN did indeed create this monster/mentality. And they deserve a LOT more than they got.

Not much sympathy here! https://t.co/KcQkTRIWVr

3. I wonder what is going on here? The title claims:

LAPD performing forced vaccinations on mentally ill, disabled & homeless people against their will.

That can’t be happening. Can it? Any information appreciated.

4. Robert Speranza resigns in Italy, admitting This is a Marxist Revolution using Corona

(We have asked the Italian speaking team to chase this down in Italian media. If its true, its the only story that matters. I really hope to have more on this later today.)

Roberto Speranza is the Italian politician of the Chamber of Deputies who served as national secretary of Article One. He also served as the Minister of Health since 2019 under the government of Prime Minister Giuseppe Conte and was later confirmed by Prime Minister Mario Draghi. During his tenure, he was in charge of the response to the COVID-19 pandemic. He has resigned saying:

Speranza has said he is ashamed that the lockdowns have been akin to Stalinism. Mario Draghi, who took Europe to negative interest rates and destroyed the European Bond market, is trying to crush Italy into a leftist government where the EU is in total control. They have undermined the free markets and cannot repair the European economy. Raising rates would blow up the European Central Bank and unravel the EU framework.

UPDATE: Our Italian sources say that Speranza did NOT resign, and that Giorgia Meloni has some kind of action against him. The actual quote from him appears to be directed at Italian business owners:

“I decided to be very strict by imposing to close to reaffirm the ‘culture of the left'”.

Thank you HeHa for this one.

5. Mexican-American woman, 70, ‘is battered on LA bus by racist black woman, 23, who thought she was Asian-American’

(There has been a large number of race-hate motivated attacks on East Asian people by African-Americans for some time now, which is of course not reported on, unless it can somehow be spun by a lie of omission as being perpetrated by White people. They are in that most cynical sense, being used to make revolutionary propaganda like the poster seen on Ottawa Lamp posts this week, and shown at the bottom of this post. This is a black on Asian hate crime. But reporting will not reflect this as a rule.)

An elderly Mexican-American woman was badly beaten by a racist bus passenger who mistook her for an Asian-American, the victim’s son said.

The 70-year-old victim, named only as Becky by her son Pete, suffered a concussion, a broken nose, swollen eyes and had her hair pulled out last Friday.

She was attacked while on her way to go grocery shopping in Los Angeles‘ Eagle Rock neighborhood.

Beasley allegedly attacked the 70-year-old as she was trying to get off the bus after calling her an anti-Chinese slur, despite Becky being Mexican-American. 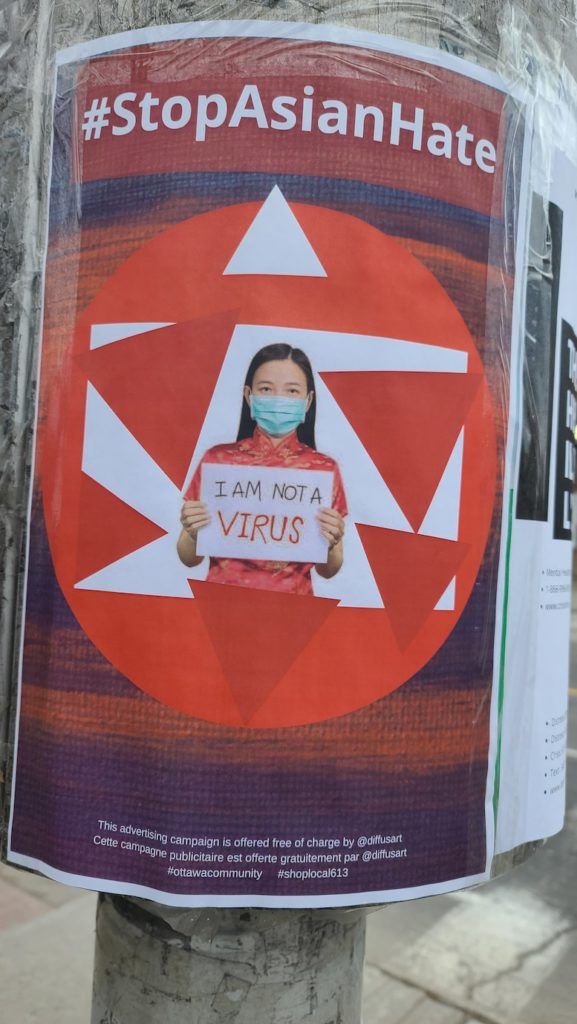