Meanwhile, at the vaccination centres in Montreal, business is slow

2. Police turn up at the home of ‘shaken’ California podcaster for ‘threatening AOC’ after he posted a tweet criticizing her comments on Palestine and Israel – but she insists it WASN’T her who called it in

Police visited the L.A. home of a podcaster this week a day after after he posted a tweet criticizing AOC and her comments on Israel and Palestine.

Ryan Wentz runs the online show Soapbox and tweets under the handle Queelamode.

On April 7, he posted a link to an interview where AOC stumbled and struggled to answer questions on how to resolve peace in the Middle East. Wentz called her answers ‘incredibly underwhelming’.

The next day, two California Highway Patrol officers visited him at home in L.A. to caution him for allegedly threatening a member of congress.

He claims the cops said they had received a call from Capitol Police that he had ‘threatened’ the New York congresswoman. They left him their card but took no further action.

‘The officers said, “We got a warning about a sitting member of Congress. And it was because of your tweet, which tagged them in it.” 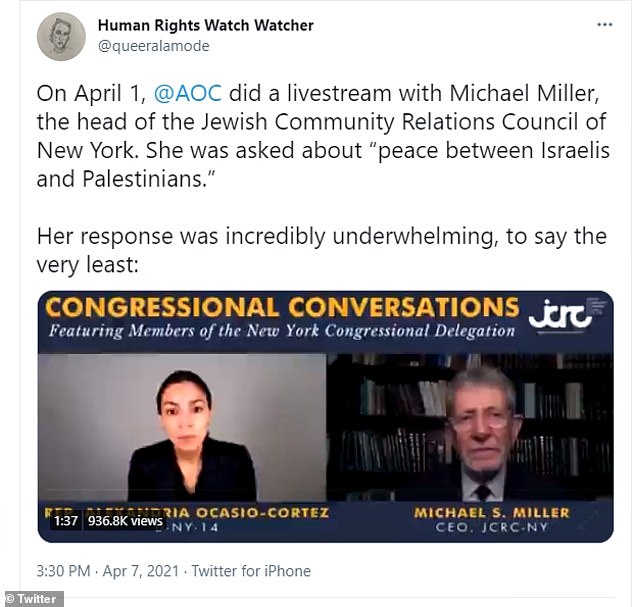 (This is perhaps the most concerning story to come out of the US this year so far. A year of concerning stories. The police go to your door and intimidate you for the most mild criticism of a woman who in fact is a communist revolutionary, and has done nothing since being in office that is not destructive to the US and the principles upon which it stands.)

3. This analysis of China-Filipino relations does not come out and say that Covid is the prime weapon China uses against the Philippines, but its impossible not to come to that conclusion as they beg for vaccines to allow them to open the country back up, as their oceans are full of thinly disguised Chinese ships of war.

Thank you M,. Richard, Johnny U. and all who contributed to this effort in a number of ways today.