The Tucker Carlson video with a proper analysis of Trudeau as a “Cheerful Idiot” who is actually more like “Mussolini”, is no longer a sticky post but can still be seen at this link.

1. It appears we now know the reason the US Government-media complex claims a guy ramming the gates and murdering a cop with a knife at the Capitol building isn’t terrorism. They are using the PC/Cairo declaration of terrorism, meaning that an act of jihad cannot be terror from an officially Islamic point of view, and cannot be terror because it was a black muslim convert attacking a police officer from a leftist point of view.

EXCLUSIVE: The man who rammed a car into Capitol Police, killing one, has been identified as Noah Green. Green was armed w/a large blade when he was shot dead. He identified as a follower of the black nationalist Nation of Islam movement.

Here is another photo of the deceased U.S. Capitol attacker (25-year-old Noah Green aka "Noah X") that I managed to save before Facebook deleted his entire profile. #NationofIslam #Capitol #CapitolHill pic.twitter.com/k0FcEWHsmx

NBC's Pete Williams reports on @MSNBC: The suspect in Capitol Police incident is a 25 year old Indiana man named Noah Green. May have lived in Virginia. On his Facebook page, he notes that he is a follower of the Nation of Islam. Suspect is now dead.

Heavy.com (Usually the best on these things)

Noah Green, 25, has been identified as the Capitol Hill attacker, who killed a police officer and injured another. His Facebook page identifies him as a follower of Louis Farrakhan and a member of the radical group Nation of Islam. pic.twitter.com/7o9pbSixek

We also learn from this that Facebook is complicit in deceiving the US public towards a far left wing, islamic narrative, where all revolutionary/jihad actions are to be sanitized and renamed into positive things, while all counter-revolutionary actions are to be described and treated as racist, white supremacist, terrorism, climate denying etc.

A note left at the site referred to Passover being a “Jewish celebration of killing thousands of Egyptian children.”

(March 30, 2021 / JNS) Police in Norrkoping, Sweden, are investigating after someone left a hate-filled message and a group of dolls hanging outside a synagogue there on the first day of Passover.

According to a post from the Anti-Defamation League, the note referred to Passover being a “Jewish celebration of killing thousands of Egyptian children.” The ADL also posted a photo of some of the hanging dolls with what appeared to be red paint or markers on them.

A disturbing incident on the first night of Passover, shared with ADL by the Swedish Jewish community. Dolls were hung near the synagogue in Norrkoping with a message about Passover being a Jewish celebration of killing thousands of Egyptian children pic.twitter.com/DLT2LUgY5k

3. Riot police deployed for a second night in the Brussels park where thousands gathered over a hoax post about a concert that didn’t happen, but riots did. MANY videos are available on that in the Reader’s links comments over the past couple of days. But it sure looks like there would have been no violence at all if police had not attempted to enforce Corona lockdown measures on the people who were lured to the park. People would likely have gone home when they realized nothing was going on. Once again, the damage done by the solution is attributed to the cause, real or imagined, to justify the solution. Sounds a little like the Hegelian scam doesn’t it?

(You know, if the Chinese had just thought to run over those people with cops on horses instead of the army in tanks, they would have had no blowback at all!)

4. No matter how you slice it, the last Federal US election was indeed rigged. If for no other reason, and there are other reasons, than that Social and legacy media all went to extreme lengths to disadvantage any supporter of Trump, shadow banning and outright banning, and Facebook even disallowed fundraising for some Republican groups, to the point where it was unquestionably and undeniably election rigging. The US would be extreme on any other nation that buggered democracy that way and that much. But there are little events where some of the irregularities are being looked into, and some, albeit minor players, have already been to court and convicted for election fraud. Of course, not enough to change the outcome, those cases the courts won’t hear to the chagrin of SCOTUS justice Clarence Thomas. But some seem to be sort of in process.

If there was any doubt something fishy was happening in/around Phoenix Arizona in the 2020 election, those doubts can be eliminated.  Something sketchy is afoot. 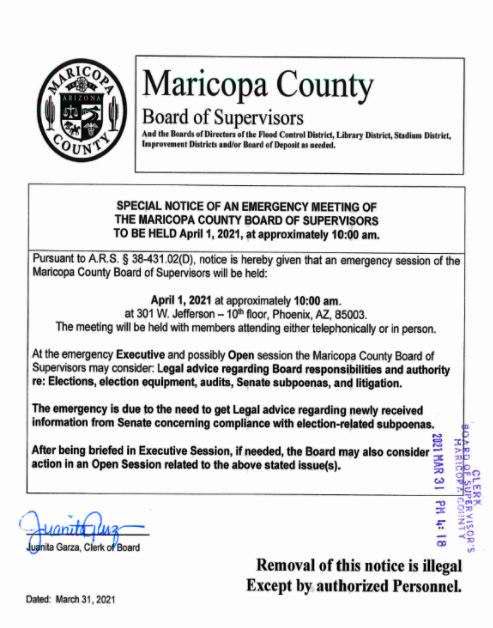 A few weeks ago a judge agreed with the republican Arizona senate that an audit of Maricopa County ballots was justified.  The judge agreed with the Arizona Senate that subpoenas were validly presented, there was information that supported the suspicion behind that ballot audit request, and the state had authority to reach into the Maricopa county election system and audit everything, soup-to-nuts.

Then yesterday the Maricopa County election board held a closed-door emergency meeting as the Senate subpoena was about to be executed.

Again, if the board of elections  have nothing to fear, then the officials would not be opposed to a public hearing of their “emergency” concerns.  After all, sunlight is the best disinfectant. […]

Thank you EB., M., Sassy, PC., Yucki, Richard and all who are paying attention this weekend.