1. If a conservative of any ethnicity shoots anyone for any reason, its “white supremacy”. But if what is likely a muslim goes on a stabbing rampage then its the fault of the knife.

SEVERAL people have been injured in Frankfurt, Germany, this morning after a knife attack.

The incident is understood to have taken place near Frankfurt train station district at about 9am local time. At least three people are believed to have been seriously injured in the attack. Police cordoneded off the site as a large number of emergency services attended the scene.

According to initial findings, the suspect acted under the influence of drugs.

Those injured in the attack were rushed to hospital and are not believed to have life-threatening injuries.

(Subtle but clever writing. All to deflect agency away from the attacker and on to the weapon. Gun control advocates will do this as well to guns when the shooting is not more expedient as a tool against “white supremacy”.)

2. ANOTHER Doctor speaks out against the measures being forced on Ontarians

(Our entire ethos is about not discriminating on the basis of this sort of thing. But as Biden is 100% anti-gun in the hands of non-state agents, it certainly makes sense to force them to live to their own standards. In a way, its a fair version of Alinsky rule 4. Except with Alinsky’s rule, the idea is to force non-leftists to live up to their own rules in a way that they force to fail. Alinsky’s example is, if an organization promises to write back everyone who sends them a letter, send them hundreds of thousands of letters. You get the idea. This is a more just application)

A Missouri gun store is turning more than a few heads after announcing that it’s not selling guns or ammunition to supporters of Democratic President Joe Biden.

Oh, and Trigger Firearms and Reloading in Jefferson City posted its Facebook message on Inauguration Day, no less:

What was the reaction?

It isn’t clear how many Biden supporters in the area took issue with the stance of Trigger Firearms and Reloading. But bear in mind that Missouri voters solidly supported former President Donald Trump (56.8%) in the 2020 election compared to Biden (41.4%), and that Jefferson City — the state capital — also leans conservative.

5. I got the following insightful text last night:

Double-masking is a sensible and easy way to lower your risk when you have to spend more time around others — in a taxi, on a train or plane, or at an inauguration. 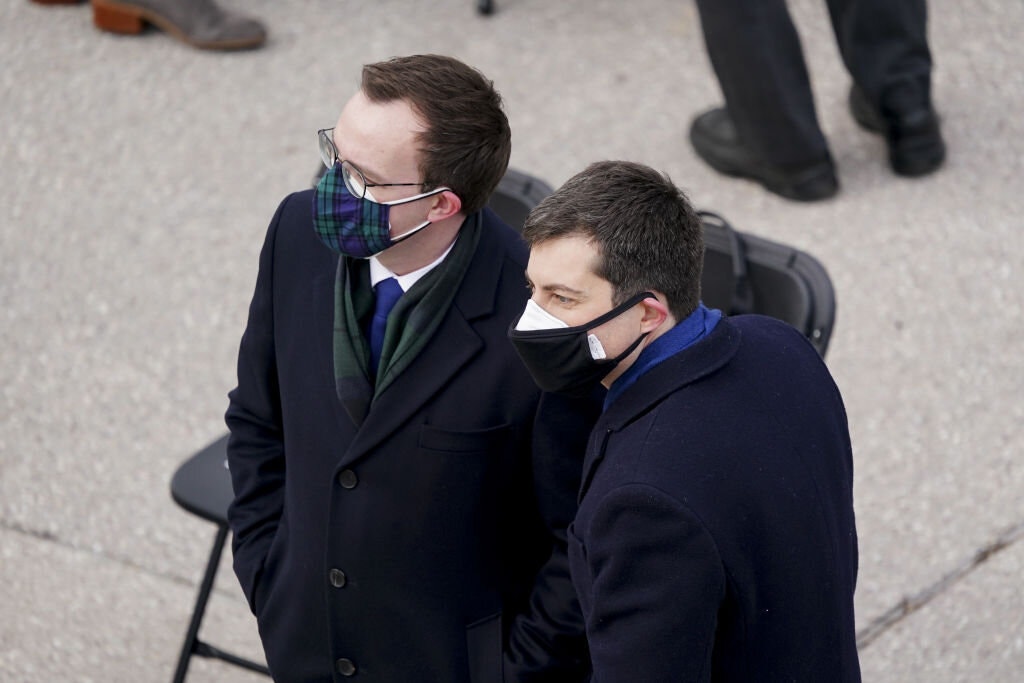 Pete Buttigieg, right, the former mayor of South Bend, Ind., and his husband, Chasten Buttigieg, wearing double masks at the Capitol on Wednesday for the inauguration of President Biden.Credit…Kevin Dietsch – Pool/Getty Images

But the fashion trend that most excited me was the double mask! Double-masking is a sensible and easy way to lower your risk, especially if circumstances require you to spend more time around others — like in a taxi, on a train or plane, or at an inauguration. Pete Buttigieg, the former presidential candidate and now the nominee for secretary of transportation, was spotted double-masking. It appears he was wearing a high-quality medical mask underneath a black cloth mask. His husband, Chasten, was sporting a similar double-masked look, but with a fashionable plaid cloth mask that coordinated with his winter scarf.

Thank you MissPiggy, Richard, Johnny U., EB., ET., M., Hellequin GB., Vic A., C., PC., and a large number of others, regulars and new people who are red pill pharmacists, or new recipients of prescriptions.