HST/GST on digital purchases to pay for pandemic recovery

Finance Minister Chrystia Freeland says Canada will go after big tech and pursue sales taxes on digital services and purchases which have not been taxed so far. This, as Canada’s deficit rises to $381 billion. Xiaoli Li has more.

(My math is quite poor but its clearly better than Freeland’s. Paying for the Covid measures with a tax on netflix and other internet services would take thousands of years.)

BBQ guy not giving up that easily. Tells other small business owners to go ahead and do it – open your business and fight for your freedoms! Message goes international #cdnpoli #freespeech @fordnation #onpoli #topoli https://t.co/nkF3dnkzdq

4. For those of you that still think WebMD has anything to do with medicine or science, this article claiming that “study finds sociopaths less likely to wear masks” does not actually link to the study, making this article about as scientific as the Lancet on Hydroxychloroquine.

August 25, 2020 — A study conducted in Brazil — the nation with the second-most coronavirus cases and deaths in the world — found that people with sociopathic traits were less likely to follow safety measures designed to curb the virus, such as face mask wearing.

“Our findings indicated that antisocial traits, especially lower levels of empathy and higher levels of Callousness, Deceitfulness, and Risk-taking, are directly associated with lower compliance with containment measures,” said the study published in the online journal Personality and Individual Differences.

“These traits explain, at least partially, the reason why people continue not adhering to the containment measures even with increasing numbers of cases and deaths.”

People who tested for high levels of empathy were more likely to follow coronavirus safety measures, the study said.

(Perhaps then, anyone who doesn’t wear a mask should claim a medical exemption because they have a condition that makes them mask averse. Also, if people without masks are likely sociopaths, I would leave them alone. You really don’t want to piss off a sociopath.)

5. One of our German translators tells us that yes, this was a Nazi slogan and excuse for state control. I hope to find a link to this at some point during the day.

The Nazis had a phrase which covered all abuses by the State: 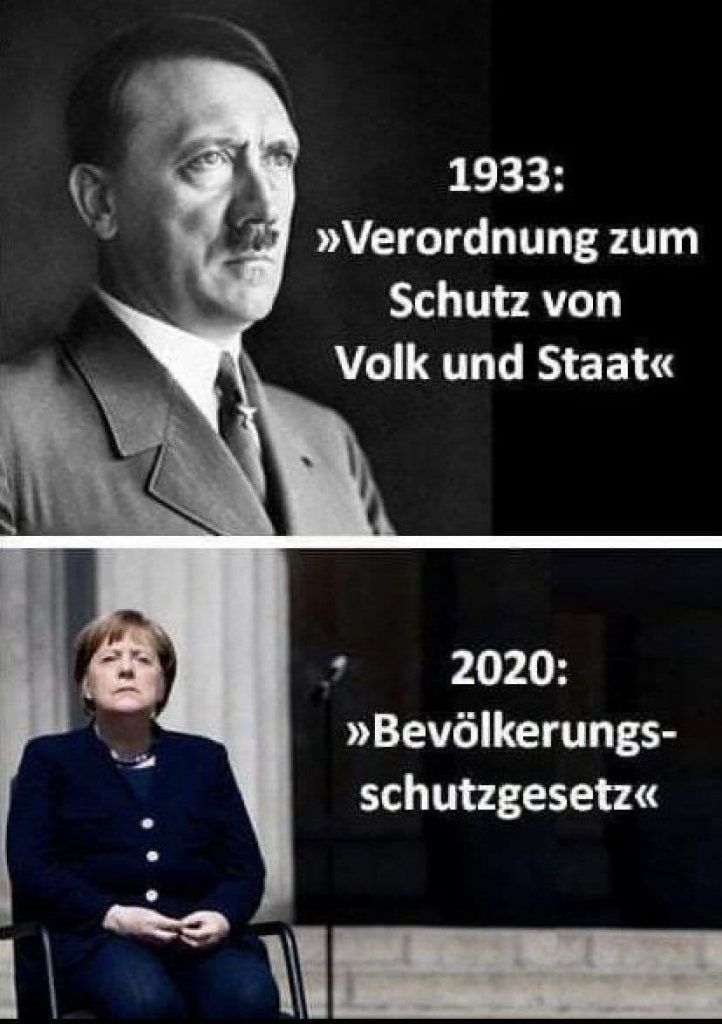 Thank you ALL who contributed to the efforts of this site to keep its, ours and my, eyes on the prize.