1. New York imam explains how life is to be for women

An imam in New York

-a girl can only leave her father's home upon marriage/death
-women are weak, easily deceived
-men must straighten out women
-girls' freedoms threaten society
-marry them off
-she's never free

The exact mentality of #Iran's regimepic.twitter.com/r4a2gxKghb

2. Time for Israel to rethink who it sells drones to:

So everyone who are using #Armenia ties to the Iranian regime – as an excuse to support #Turkey in #Azerbaijan – can please stop their propaganda now.
Do the right thing – always stand up against the Iranian and the Turkish regime!#NagornoKarabakh https://t.co/jU4KHWUnFn

3. A few items on how Joe Biden seems to be at or near the centre of having Seal Team 6, the men who got to Usama Bin Laden and eliminated him, assassinated. Start at about 4 minutes.

This video is about Joe Biden Speech May 3, 2011 where he divulges top secret and classified information about the special operations unit who conducted the raid on bin Laden’s compound, inevitably putting a price on their head for the revenge by the muslim brotherhood.

(When the heli with Seal Team 6 was shot down over Afghanistan, we posted at the time that there was suspicion about it as there is apparently a rule that Seal Teams NEVER are to all be on one helicopter.)

The Wiki on the killing of OBL.

Two more items on the killing of SEAL team 6

SEAL TEAM SIX – Extortion 17 EXPOSED
theunitedwest – August 6, 2015 – Today, on the fourth anniversary of the shoot down of NAVY SEAL helicopter, call sign – Extortion 17, we re-release this critically important Press Conference that took place on May 9, 2013 in Washington DC.

(These materials were sent in by a regular reader. While we have not vetted them all yet, we are confident that it presents evidence of events that become increasingly believable as we learn more about the Obama-Biden-Clinton administration.)

4. UK: Labour MP Declares Free Speech Does Not Include Freedom to ‘Generally Offend’

(And it will be up to the government to decide what is offensive and what is not. So that statement means that Government shall be unto like a God that bestrides the land and you can be a criminal at a whim with each word spoken)

Labour’s shadow government minister for legal aid, Karl Turner MP, has said that freedom of speech does not include the freedom to “generally offend.”

Turner, a self-proclaimed “#LeftyLawyer”, issued his remarkable statement in response to Brexit campaigner turned conservative commentator Darren Grimes defending himself against London police investigating him over an interview in which one of his guests said something offensive.

“Freedom of speech Darren doesn’t afford people the freedom to make racist remarks or generally offend,” the politician declared in a now-deleted tweet, adding: “I shall say nothing further given that you say [the Metropolitan Police] are investigating a complaint.”

(It needs also to be noted, that “racist” now means anything which stands in the way of a full blown communist agenda, including genocidal racist remarks against White people or anyone who supports Greek civilization. Really.)

Can someone explain to me how a country of over 10 million people has less than one death per day without the miraculous power of cloth masks?pic.twitter.com/I5oGeqgGUW

“Swedish Pupil Banned From Wearing Cross in School Photo While Muslims Allowed to Keep Their Veils,” by Igor Kuznetsov, Sputnik News, October 12, 2020 (thanks to Henry):

A 15-year-old student was not allowed to wear a cross when posing for a group photo in a Swedish school earlier this autumn. Other students, however, were allowed to wear their religious symbols, the Christian newspaper Dagenreported.

“I wore a purple sweater with a collar, my cross hung on the outside. I had a rather long chain and a cross in metal with Jesus on it”, the boy told Dagen.

According to the 15-year-old, who wished to remain anonymous, a female photographer asked him to take the cross off, venturing that it would be offensive to include it in the school photo. The boy was admittedly shocked and mortified, but obeyed and put the cross in his pocket.

7. Tucker on the start of the SCOTUS confirmation hearings

A portrait of Chinese communist leader Xi Jinping cast as ‘BAT MAN’ has been removed from a Swedish restaurant after users on social media complained that the satirical jab at Xi’s role in the spread of the Wuhan coronavirus was racist.

On Saturday, local fashion blogger Bryan Gray Yambao, who goes by ‘Bryanboy’ on social media, visited the Riche restaurant in central Stockholm with a friend of his from Hong Kong. The pair noticed the bat-likeportrayal of the Chinese dictator, which adorned Xi Jinping with two pronounced bat ears.

Bryanboy took to Instagram to pronounce that he was “embarrassed and mortified” that he took his Hong Kong Chinese friend to the restaurant, comparing the satirical portrait to the “racist abuse” East Asians have experienced during the pandemic.

(Maybe the restaurant can replace it with the graphic below) 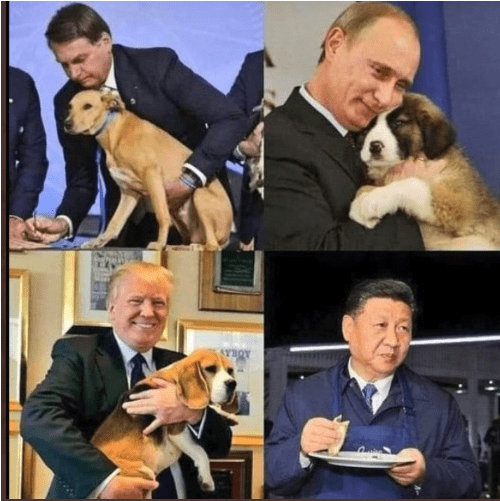 9. The enemy-propaganda network in Canada, CBC attempts to tell Canadians who they can trust. The people on the list of course, all take money from the Trudeau Government.

10. Canadian province of New Brunswick makes masks mandatory even outdoors in some areas.

Thank you EB., M., Wrath of Khan, Richard, Babs, ET., Val Price, Johnny U., C., Yucki and all who sent in materials over the weekend and today so far.