(I find myself needing a link to this post so often for my various correspondences that it seems its likely worth a repost. Especially as the left-Islamic alliance heats up)

This letter was tweeted out some days ago and found its way to my inbox.

It was from a PhD candidate at Columbia, learning and writing about North Africa, the Sahel, and France. Visiting Fellow, European Council on Foreign Relations (ECFR).

Ava Lon was good enough to translate it for us all.

It is worth noting that 1928 is the year of the formation of the Muslim Brotherhood, the organization which is at the root of most of the world’s problems today, including but not limited to, North Korea.

The letter suggests the explanation for that claim. Also that North Korea and Iran are clearly running parallel nuclear weapons programs, and that there is in fact a mosque in Pyongyang and its one of the nicest buildings there, and the muslims in it all look well fed.

Translation below the letter image: 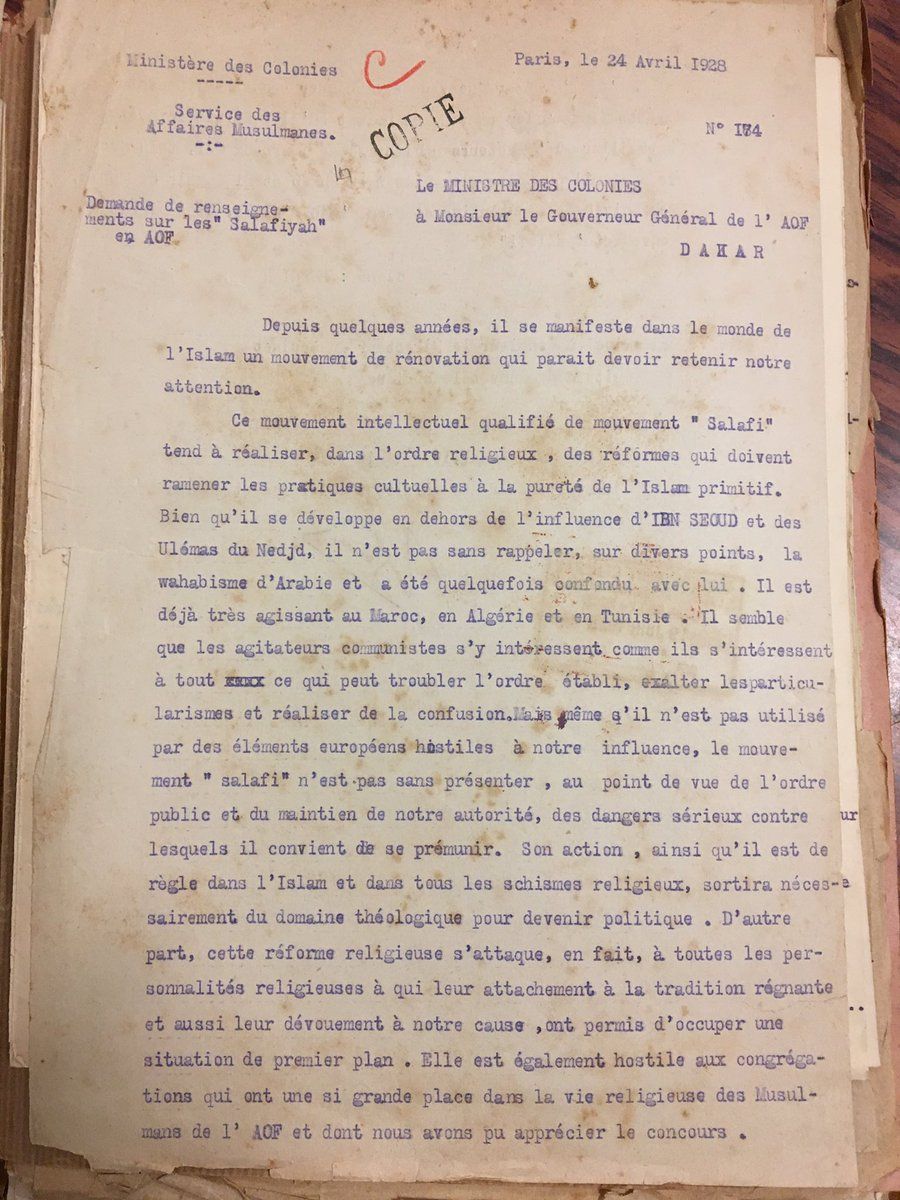 For a few years now, there has been a renewal movement in the Islamic world that should, it seems, be attracting our attention.

This intellectual movement known as the “Salafi” movement tends to realize reforms in the religious order which must return the practices of worship to the purity of primitive Islam. Although it is developing outside the influence of IBN SEOUD and the Ulemas [Sunni Islamic scholars] of the Nedjd, [Nejd or Najd, central part of the Kingdom of Saudi Arabia] it is not unlike, at various points, Arabian Wahhabism, and has sometimes been confused with it. It is already very active in Morocco,

But even if it is not used by European elements hostile to our influence, the “Salafi” movement does not fail to present, from the point of view of public order and the maintenance of our authority, serious dangers against which it is necessary to protect ourselves. Its actions, as is the rule in Islam and in all religious schisms, will certainly leave the theological field and become political.

On the other hand, this religious reform, in fact, attacks all the religious personalities whose attachment to the reigning tradition and devotion to our cause allowed them to occupy a leading position. It is also hostile to the congregations that have such a large place in the religious life of the Muslims of the AOF [French West Africa] and whose contributions we have appreciated.