This post will be updated as news comes in. This material is a little chaotic as I post everything that looks good either at the start OR the end. No real system at this point, as if it looks really important its at the top. There is a video feed of stuff at the bottom which is quite good so long as it goes on.

“I have a gun in my pocket”

The #Toronto ramming suspect being taken into custody. pic.twitter.com/MpZlo4hcdm

Perp is clearly trying to be martyred here.

The comments under this post has links to videos but so far, as of 2:28, none have any information except images of the intersection.

Here’s the suspect confronting police near Yonge and Finch.
He’s pointing something at the officer and claiming he has a gun in his pocket.
Camera turns away, but another vid shows him dropping the object and hitting the ground for the arrest#Toronto pic.twitter.com/Mto1SKh7Wn

“It was a nightmare.”

#UPDATE: Toronto Police confirm a van mounted the curb and hit a number of pedestrians. The driver fled the scene. Police later located the vehicle at Yonge and Sheppard. Driver is in custody, alive, and no motive at this point @Citynews

Did the guy drop a gun after pointing it an officer who stopped him?

Video from Yonge and Finch at Toronto pic.twitter.com/YvS8GcJ8pg

Moments ago people began yelling on Yonge St and directing officers to an underground garage. They just arrested another man who has damage to his car. Unclear circumstances at this point. pic.twitter.com/8zfrwr359Y

The incident happened at the busy intersection of Yonge Street and Finch Avenue, according to the Toronto Police Service. Initial estimates suggest eight to 10 people were struck.

The extent on injuries is unknown and ambulances are on the scene.

It may well be the first day of jihad season now in Canada.

As many as 10 have been struck by a white van on Yonge St. in Toronto Canada. pic.twitter.com/zSaUnzSP0f 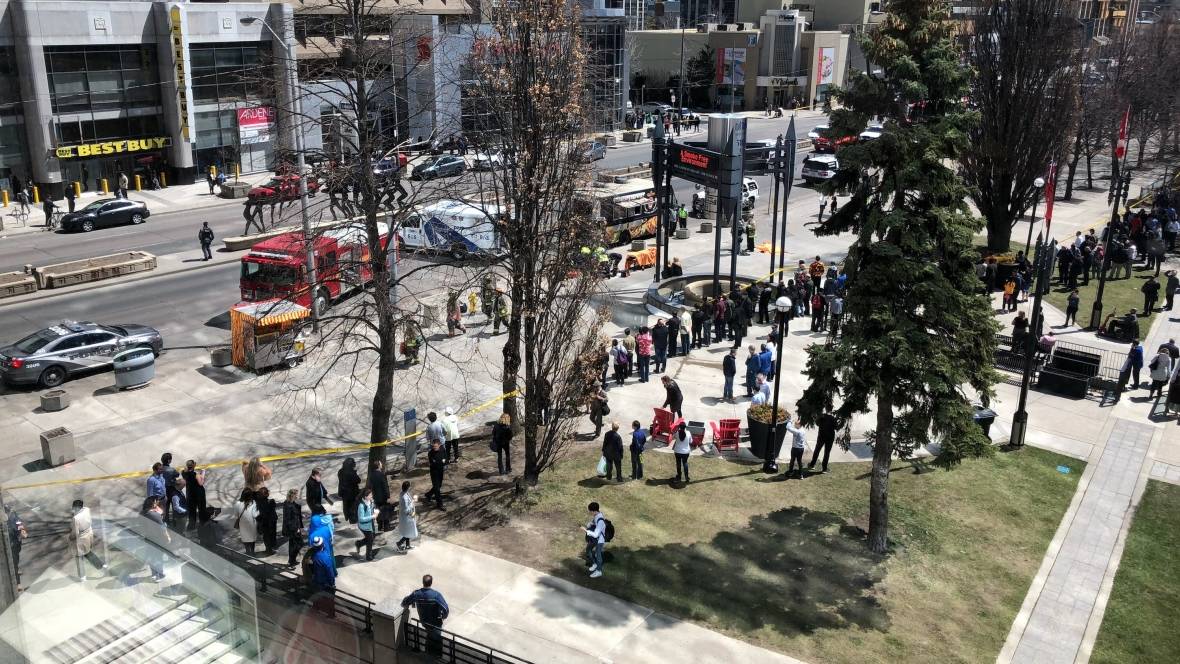 Witness Alex Shaker, who was driving southbound at the time, says the van was travelling at high speed on the sidewalk.

“He started going down on the sidewalk and crumbling down people one by one,” Shaker told CTV News Channel on Monday afternoon.

Shaker said he saw the vehicle strike someone with a stroller.

“He just destroyed so many people’s lives,” he said. “Every single thing that got in his way.”

The extent of injuries is unknown and ambulances are on the scene.

The van suspected in the collision was found on Poyntz Avenue off of Yonge, just south of Sheppard Avenue West. The van is marked as belonging to the rental company Ryder.

Toronto paramedics are advising people to stay out of the area of Yonge Street near Finch and Sheppard Avenue.

They stopped him at Yonge and Sheppard pic.twitter.com/M4jyZlJdmi

RAW video of people desperately trying to save victims of this attack. And whether or not it was jihad, it WAS an attack.

33 Replies to “BREAKING: Possible truck of peace in Toronto”