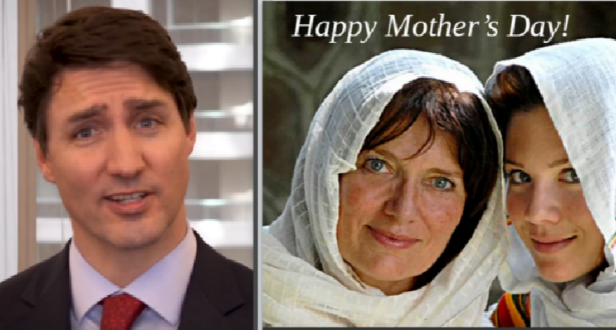 Trudeau put a photo up on social media of his mother and his wife dressed in Islamic headscarf to celebrate mothers day.

If anyone believes that Sweden is the world champion in grotesque self-destructive political correctness and Islamo-apologism, it’s because they have not heard about developments in Canada under the so-called liberal Prime Minister Justin Trudeau.

The 47-year old snowboard-instructor, who, despite his very privileged upbringing (his father, Pierre Trudeau was Prime Minister of Canada in the 80’s), never quite managed to get an education higher than bachelor in drama, has given the Swedes a good run for the money when the subject is the undermining their own culture. In fact, Trudeau has repeatedly gone so far that he has made a total and utter fool of himself.

Like for example when he “corrected” a young women who used the word mankind, the correct description for humanity. Instead Trudeau suggested she use the self-invented word “peoplekind”, that was more “inclusive”, he said.

Or when he, in connection with a visit to India, not only drove around the country with namaste greetings for a total of 6 days wearing imaginative costumes – costumes barely recognized by even traditional Indians – but where he also, to top it off, invited a convicted Sikh terrorist to a state dinner.

Watch Trudeau in Indian costume in the last part of the video.

It is embarrassing and unworthy of a head of state, and Canadians must be cringing by being represented by a man who is clearly more concerned with himself than by representing and protecting the country of which he is the head.

But far worse however, as Trudeau strives to wrap himself in political correctness while spouting pseudo-liberal proclamations, he almost consistently lays waste to the freedom that forms the framework for Canadian democracy:

Last year, he passed the absurd law C-16, which makes it a human right to choose your own gender, and implies that failure to accept this free gender choice is equal with hate crime. And not just that: It is also, under C-16, allowed to invent and introduce new gender pronouns corresponding to the new gender, which means that there is, after not even one year after its inception, more than 70 approved gender pronouns in Canada. It is an unprecedented violation of freedom of expression in a democracy, to force citizens to submit to such a gender paradigm.

Lately, this March, Trudeau’s government has supported a bill tabled by the Pakistani-born member of the Canadian government, Iqra Khalid. This bill proposes an anti-islamophobia law that would criminalize islamophobia and condemn anti-Islamic rhetoric and actions.

Trudeau’s self-promoting as a feminist and humanist is in so many ways counter-productive in relation to the values (freedom and inclusion) he purports to protect. It is a massive violation of the freedom of expression of Canadians, that they must not only not say that there is only one gender, but also not be allowed to say that Islam is a violent religion that is dangerous for Canadian freedom and democracy.

In addition, when you as head of state constantly promote specific identities such as sex, ethnicity, cultural minorities, etc. you end up creating deep divisions in the people while creating an adversarial atmosphere – instead of cohesion. When he puts gender, sexual orientation, and political conviction before the community – he undermines what brings the population together – namely that they are all Canadians.

So, not only does Trudeau time and again attack freedom of speech in Canada. He also sets identity policy before national and cultural affiliation. When a Prime Minister does this long enough, he removes everything that ties the population together. We must hope that the Canadians come to their senses and removes him at the next election.

And a quick news update on Trudeau’s deconstruction of Canada as a polity:

And by the way…

“Liberal MP Iqra Khalid is pushing back against criticism over her decision to introduce a religious leader at an event” organized by the virulently antisemitic Palestine House. This story is a followup to the Jihad Watch post on Tuesday: “Canada: On Trudeau’s behalf, Muslim MP Iqra Khalid honours anti-Israel activists”. […]

Khalid is in hot water for introducing an Assad supporter, Archbishop Atallah Hanna. Hanna is also a Palestinian activist who supports jihad suicide bombings. Khalid supports the antisemitic Palestine House, and Palestine House supports her, contrary to her attempts now to distance herself from it. At the celebration of “Land Day,” Khalid referred to the Public Relations head of Palestine House as “Brother Amin,” while he referred to her as his “dear friend” and promised: “we will work together for the next federal election in 2019.”

Conservative MP Rachael Harder was the first to raise the issue in the House, accusing Trudeau of sending Khalid, who represents Mississauga—Erin Mills, to “bring greetings on his behalf at an event organized by the anti-Israel Palestine House.”

38 Replies to “But how does the Euro-press feel about Trudeau?”