After 10 days of investigation, Berlin Police have now released these wanted photos of the suspect in an extraordinarily cruel attack on an 87-year-old lady.

The man is suspected to have mugged an 87-year-old lady in Berlin, and wounded her massively. Photos: Berlin Police.

The original account of the assault is extremely disturbing, please be aware of that, if you wish to read on.

Last Wednesday, around 10.50 AM, in the district of Zehlendorf, Berlin, the 87-year-old pensioner Anneliese L. was on her way home from the ATM machine at the nearby subway station, when an unknown man assaulted her. He knocked her to the ground, so that her head hit the cobblestones, and dragged her along for several meters.

When a woman rushed to help, the attacker escaped with Anneliese L.’s purse on a bike.

The witness called police and ambulance, and was able to describe the attacker. Anneliese L. was taken to hospital and underwent emergency surgery.

A neighbor, who lives across the street, is still in shock, and tells Berliner Zeitung B.Z.:

“I was just about to walk the dog, when I saw the lady across the sidewalk. She did not have a face anymore. Everything was hanging down. All was full of blood. The police officers cried. I have never seen anything as brutal as this in my life.”

According to a police spokesman, Anneliese L. is not in critical condition, but her face is so badly disfigured that police initially, mistakenly, thought that the attacker had stabbed her in the face with a knife. The responding officers received pastoral counseling.

Thanks to the witness, police are now able to release wanted photos from the surveillance camera of the nearby subway, showing the suspect and his bike. Police are also looking for other subway passengers as possible witnesses. 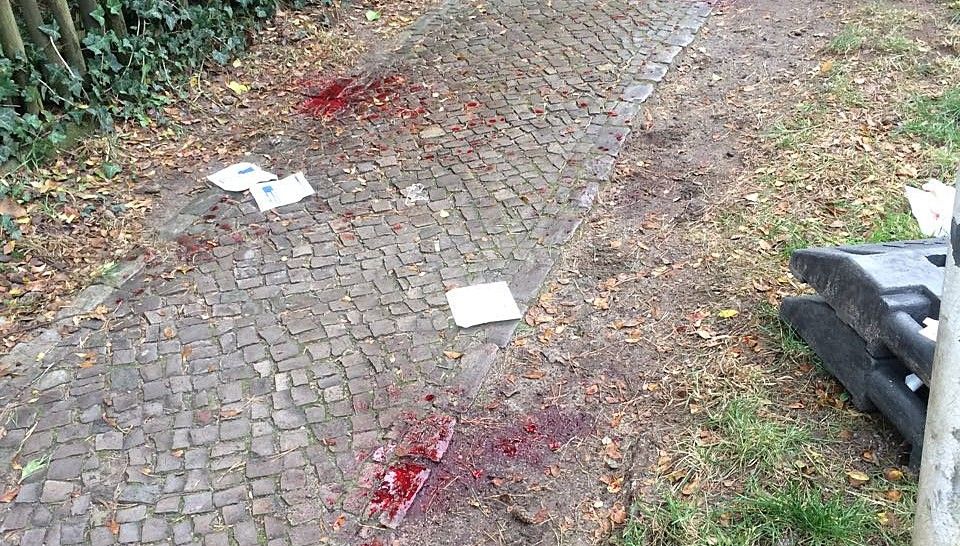 The scene of the attack. Photo: Timo Beurich