An original translation from the blog of Vera Lengsfeld.

EU-Commission Plans The Final Solution To “Disinformation On The Internet”

„Since the election of Donald Trump as the president of the USA at the end of 2016, there are increasing worries in Europe that fake news on the internet might drastically manipulate public debate. The EU commission therefore wants to take measures against fake news, and, for this purpose, has summoned a group of experts from the sciences, and representatives of the media industry and platforms like Facebook, Google and Twitter. This ‘High Level Group’ will submit suggestions for fighting fake news on the internet until summer, write Netzpolitik.org on their website about the plans of the Eurocrats. One does not need particular skills in reading between the lines to understand what this means: The electoral success of Trump was only possible because he had a large voting base who had lost their trust in mainstream media, and who were looking for “alternative” information on the web, far away from anti Trump campaigns. This must not happen in Europe! Just imagine how Eurocracy might end, if the people in Europe were no longer to listen to the soothing mainstream media.

In the German sphere, the so-called “alternative media” are on the march, while “long-established” magazines like Bild, Spiegel, Stern, Focus, etc., keep losing readers. The reason is simple: their unconditional courting of the Merkel regime.

So many of the positive news about the mass migration was such a brazen pack of lies that it was insulting to the readers’ intelligence. This is taking vengeance now, and will probably not be reversibly easily.

And exactly that is the reason why there now will be a political interference. What is particularly telling is that, no matter what the committee of experts will suggest to the EU commission in the end, we will never know, because it has been ordered from the highest place that all documents will remain secret.

There is a reason for that.

There are two suggestions at the moment:

– So-called “Fake News” will be outright banned, and the operators of social networks, servers, alternative websites and other platforms will be required by law to completely delete content. You can imagine who will define what is “fake news” and what is not.

– The competitors of the “Fake News”, in other words, mainstream media, will be made more visible, by
promoting the news that is, in the opinion of the EU, more credible. Additionally, the awareness of “Fake News” will have to be increased by training, for example in schools.

All this reeks of censorship, cooptation (Gleichschaltung) and reeducation, and should be fought sternly before it comes into effect.

Do not rely on politicians, become active! Send news from alternative media per email to friends, educate your friends and family about the possibilities to receive news outside the mainstream media! Beat the Eurocrats by warning as many people as possible about the “reeducation” through these so-called “educational measures”.

Translator’s note:
Read the original EU statement here. It is pretty clear where it is truly aiming:
https://ec.europa.eu/commission/commissioners/2014-2019/ansip/announcements/statement-vice-president-ansip-european-parliament-strasbourg-plenary-debate-hate-speech-populism_en 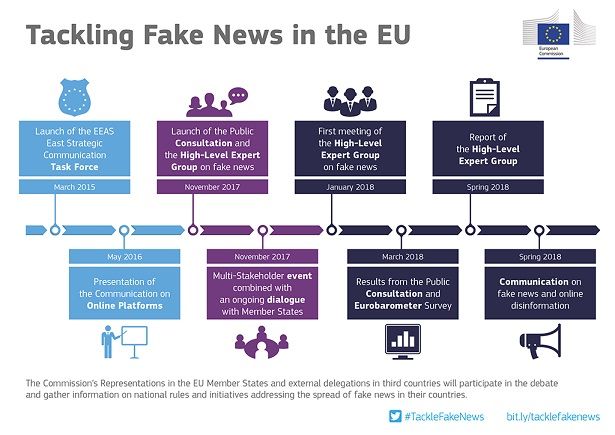