For updates, please scroll down.

l. For more than a decade, Linksunten Indymedia, whose servers are physically located in Canada, served as the German Antifa platform. Despite their open advocating of militancy, and taking resposibility for violent attacks, German authorities never took any action against them. At this moment, it remains unclear what caused the sudden change of mind.

Last year, after a data theft, Linksunten Indymedia published thousands of private adresses of ordinary citizens who are members of the AfD (a center-right, Islam-critical oppositional party); and took responsibility for vandalizing the private house of Akif Pirincci (a famous German-Turkish author of bestselling cat novels, who, after criticizing German migrant and refugee policies, has fallen from grace with the Left).
None of this has ever resulted in any action by German authorities. Wikipedia still sugarcoat Indymedia as simply “a global open publishing network of journalist collectives that report on political and social issues.”

It remains unclear what it was that suddenly caused German authorities to change their mind. One might speculate if it was the fact that this week, Indymedia took responsibility for an extensive series of sabotage acts on the German railway system which, even though it is completely concealed by the German mainstream press, put trains around Berlin to a complete halt for the whole last weekend, affecting thousands of commuters.
Der Spiegel speculates if it might have to do with the Antifa riots at the G20 summit in Hamburg last month.

As of 11 AM CET, the Linksunten Indymedia website is finally offline. Their twitter channels are still open. 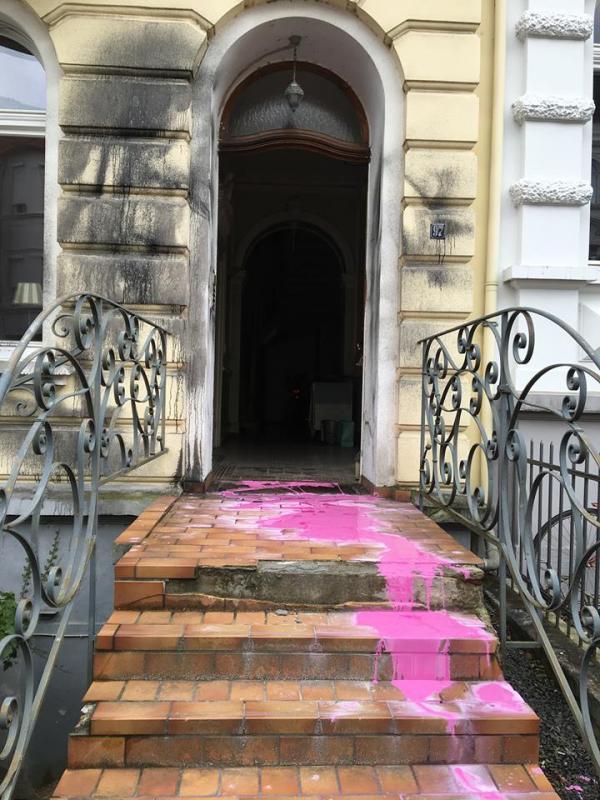 The vandalized house of Akif Pirincci, as boasted on Antifa website Linksunten Indymedia 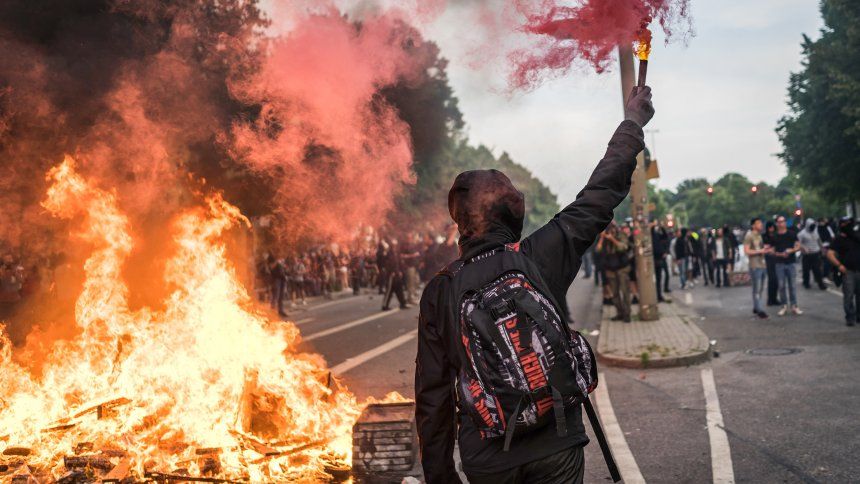 Friday, August 25, 2017, 7:12 AM
It is a serious blow against left extremes in Germany: According to Spiegel information, the Interior Ministry banned the website “linksunten.indymedia.org” on Friday morning. The decree was delivered to the operators of the platform, who live in Freiburg, in accordance with law of associations. The site were in its “purpose and actions violating criminal code” and were opposed to constitutional law, the Ministry’s announcement said. But the “Indymedia” website and their twitter channel are still available [the website has gone offline in the meantime, translator].

Security authorities deem the website, which was started in early 2009, the most influential platform of the left extreme scene in Germany – and as a forum for violent Autonomists [term the German Black Block use for themselves, translator].
In a self-portrayal from September 2016 (“Social revolution is and remains the only perspective”) the “Indymedia” organizers describe that their platform “developed intot he most important website of the radical left in German-speaking countries”: “Each day, thousands of leftists visit the website, to get the latest information about all aspects of antagonistical currents [sic!]. Occupations, attacks, debates or fights for wages – there are only few rebellions here and now that were not called for, or reported on, by ‘linksunten’.”
Each user can publish their own contributions, a team of administrators reviews the articles according to certain criteria, censors passages or completely removes texts – anonymity is the main priority of the virtual cooperation. The website provides advice for their users how to conceal their identity on the web.
In a confidential analysis, the Office for the Protection of the Constitution [German Intelligence, translator] lamented already months ago that Indymedia was a “lawless zone on the internet”. Due to their conspirational behavior, the authors of the texts, which in part are criminal, were impossible to identify, according to the investigators.

“All those beautiful claims of responsibility for attacks”
It appears that it is working principle of “Indymedia” to not know their authors: The operators cynically noted, when asked about their precautions against Ddos attacks and if they record their users’ IP adresses: “We do not want to know who publishes all those beautiful claims of responsibility for attacks..”
There are heaps of claims of responsibility on “linksunten.indymedia”, arsonry of cars of police, diplomats, security officers, Pegida followers. Paint bombs, molotov cocktails. Pepper spray attacks on fraternity members, fights with right extremists: “Hunt Nazis, Punch Nazis. And the cops too.”, an article published in December 2016 says.
Besides political statements, there constantly are instructions on how to build molotov cocktails, there are abuse and insults, calls for violence – like when in March a user wrote about the“fight against fascis” in Göttingen: “We will never again allow this, no matter how many windows we will have to break, how many barricades we will have to burn, and how many of those fascist-protecting cops will have to eat bricks.”

Responsible Heads Behind
The Federal Office for the Protection of the Constitution [German intelligence, translator] identified three Freiburg residents as the responsible heads behind “linksunten.indymedia”. But the group of operators also includes many more moderators, technicians and administrators. According to „Indymedia“ self protrayal, coordination is done via mailing lists and member meetings in which about 30 people took place.
Authorities have been monitoring the forum for years, but the ban comes as a surprise – it might be a reaction to the severe riots during the G20 summit in Hamburg. Several CDU/CSU politicians had since demanded a tougher stance against left extremists. Interior Minister Thomas de Maizière (CDU) told “Stern”, Germany needed “a strong stance against left extremism just as against right extremism”.
The 19 CDU/CSU ministers for Interior and Justice plan to adopt a so-called ‘Berlin Declaration’ next week to present themselves as tokens for safety and order in the election campaign. Allegedly, the meeting will also deal with a stronger stance against leftist Autonomists [translator: Antifa/Black Block].

update:
3. German Left Howl: “Illegitimate Act of Censorship”
„The ban of indymedia.linksunten is an illegitimate act of censorship”, said the domestic speaker of Die Linke [“The Left”, former East German ruling party] Ulla Jelpke to Die Welt. „The project indymedia.linksunten stands for a leftist, anti-capitalist counter public. To restrict their reach and internal communications is an arbitrary curtailment of the freedom of opinion and press.“
She would not like everything on the website. But the ban were an act of censorship and intimidation. „Everyone who will be accused of continuing indymedia.linksunten in the future will have to be prepared to be punished [I sure hope so! translator] – not just for the contents of isolated contributions to the site, but alone for being a part of this left project“, Jelpke said. „The ban is a threat to all other media that still discuss revolutionary and anti-capitalist positions. The purpose of this is to intimidate the left scene in Germany as a whole.“ (source: Die Welt)

I guess it says a lot about your mindset when you think it is a ‘curtailment of freedom of opinion and press’ when a website is banned that instructs how to build weapons, that publishes the adresses, and calls for the targeting, of people whose only wrongdoing is to be members of a democratic, oppositional party, and that celebrates violence and assassination. 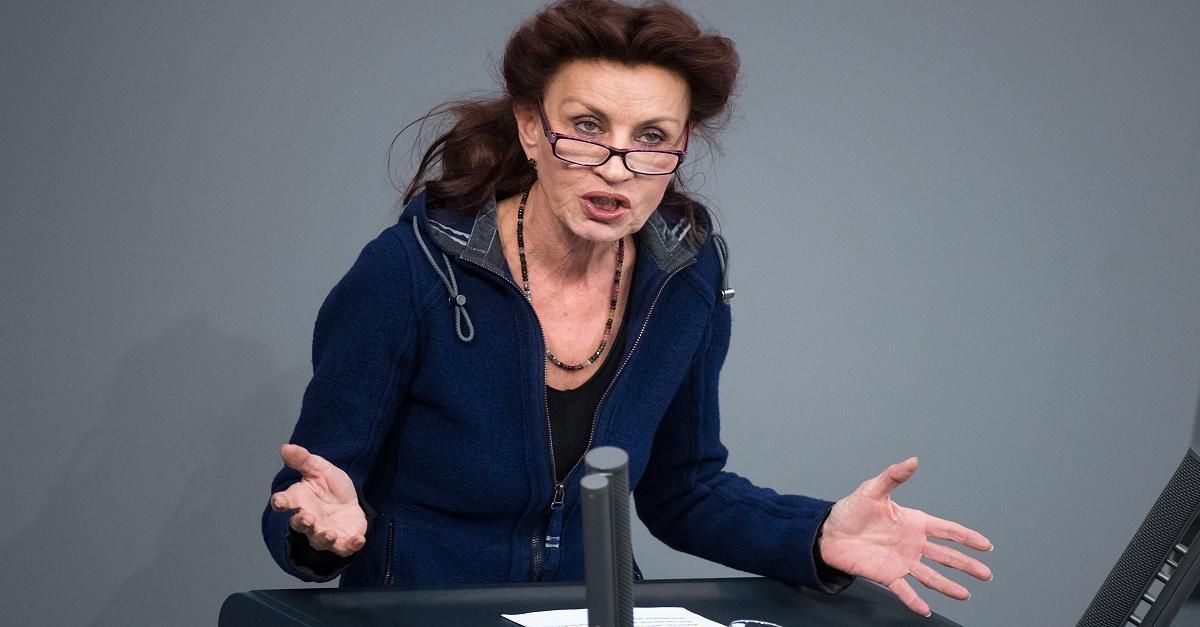