1, Yet another kebab knife wielding muslim shouting allah’s snackbar in the streets of Paris.

The link article translates as: (Thank you Ava Lon)

VIDEO: PARIS – muscled arrest on the Champs-Elysées under the cries of Allah Akbar. It happened on the Champs-Elysees this morning at 11:40. A man appeared before the 84 Gallery Champs Elysees and started screaming “Allah Akbar”. The police responded very quicky.
(They are screaming “lay down!” in the video)

Apparently many European nations have decided to deal with the problem by placing these signs on main roads in major cities. 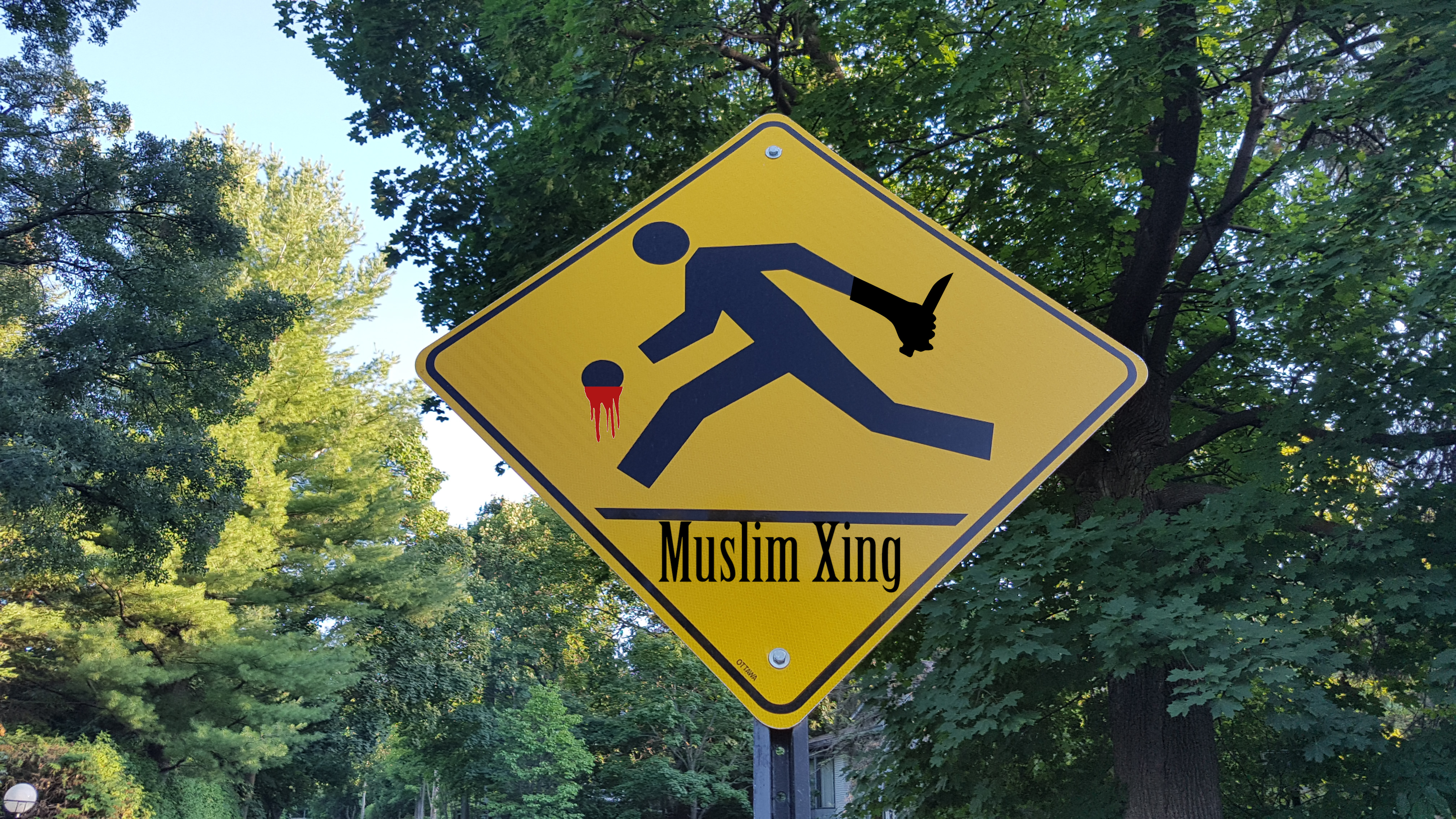 The so-called Islamic State group has released photos of weapons and kit belonging to US troops discarded after fighting in Afghanistan.

The photos include the ID cards of a soldier named Ryan Larson it obtained following clashes in Nangarhar province bordering Pakistan.

They show an American portable rocket launcher, radio, grenades and other kit not commonly used by Afghan forces.

The US has admitted the loss of weapons but insists no troops were captured.

(I was sorely tempted to put the Apocalypse Now clip where Kurtz says: “Your an errand boy for a grocery clerk) but I’m not certain it fits)

3. Muslim woman fired from work for wearing hijab in US

(This story is getting to be a regular thing. There are more and more examples happening where a woman applies for, and gets a job, then starts wearing a head cloth a few days later and sues when she is fired.)

Washington: In a case of alleged discrimination in the US, a young Muslim woman was fired from her job at a dental clinic for wearing a hijab as her employer wanted to keep a “neutral environment” in office.

Najaf Khan, who was hired as a dental assistant at Fair Oaks Dental Care in Fairfax County, Virginia, said she was fired from the new job because she wore a Muslim head scarf to work.

“I was really upset. The day that it happened, I was devastated,” Najaf told NBC Washington.

She did not wear the hijab for her interview or on the first two days of employment. On the third day, she chose to wear it because Najaf felt that she would stay at the job and wearing it was part of her spiritual journey.

At work that day, she said the owner of Fair Oaks Dental Care, Dr Chuck Joo, told her to take off the hijab.

4. Canada denies visas to more than 200 participants of “anti-Semitic” conference in Montreal

[…] In a background information on the event which goes in line with the official policy of the Islamic Republic of Iran, the organizers accuse the “world Zionism-capitalism” of standing behind ISIS and Islamophobia. In addition, they implicitly justify the Palestinian armed struggle against Israel, including actions that are deemed by the West and international human right organizations as war crimes, crimes against humanity or terrorism.

Other events being hosted under the WSF umbrella include a workshop headlined by Diana Ralph, a leading Canadian conspiracy theorist who has blamed Israel for staging the September 11, 2001 terrorist attacks, as well as Ken Stone and Tyler Levitan, members of the radical anti-Israel organization “Independent Jewish Voices” (IJV), whom B’nai Brith called a “Jewish fig leaf for neo-Nazis and anti-Semites under the guise of radial anti-Zionism”.

5. Islamic State video with the tard version of Shirley Temple. Except with a Kebab knife.

6. Gang of muslims attack police officers. According to Twitter, they were on a routing traffic stop in London. Video at site.

Thank you Yucki, M., Wrath of Khan, Babs, Maria J., Xanthippa and all who sent in materials. As usual, apply the iceberg method to this site The majority of the substance is below the water line in the comments.