The article below is from a leftist and agenda driven journalist who has been reporting on citizen’s attempts to preserve rule of law. It is being posted to give a clear picture of how the main stream media in Europe but particularly in Germany is biasing the public towards cultural Marxism and away from rule of law and classical liberalism.

An original translation by Brunhilde with much thanks.

It is a fiery appeal to fight for “Fortress Europe” — and against refugees. A rally in Leipzig for Legida: Tatjana Festerling, ex-frontwoman of Pegida, is standing on Monday evening on the truck stage. She is wearing a camouflage jacket, with the insignia of a paramilitary vigilante group from Bulgaria on the lapel, and appeals to the men who are present in the Richard Wagner Plaza — especially those “with military or police training” — to travel to the Black Sea and join the operations of the “patriots” at the border region with Turkey against the “invaders.” That, she said, is “what the elites want to prevent by all means. The living friendship between European peoples.”

In the past week, in the framework of an extensive European trip, Festerling travelled from Denmark through Slovakia, Hungary and Romania as well as Bulgaria. Together with her comrade-in-arms Edwin Wagensveld, who became famous in Pegida as “Ed the Dutchman,” she joined the patrols of the Vasil-Levski Brigade, a kind of private homeland army of nationalists. She praises the leader Vladimir Rusev as “warmhearted and upright and especially also an experienced military man,” very much appreciated by the population in Bulgaria. 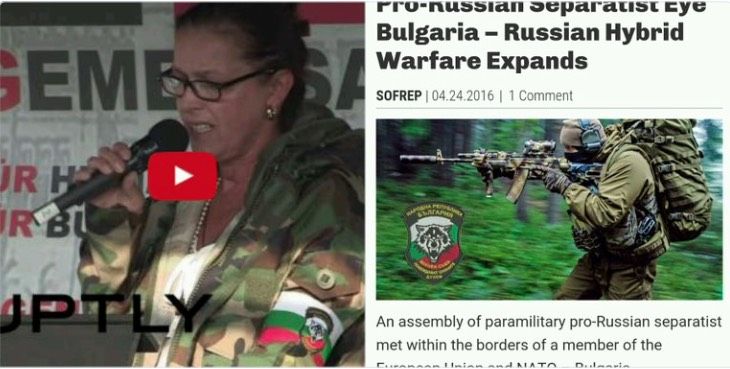 [Here you can clearly recognize the wolf symbol of the refugee hunters on the uniform of #Festerling . #le0407 #nolegida]

She also met Petar Nizamov. The “refugee hunter” was arrested in April and placed under house arrest, as reported by Bulgarian media. The Bulgarian Attorney General Sotir Tsatsarov said at the time that it was not acceptable when groups or individuals took upon themselves the functions of state bodies and hunted refugees. There are several ongoing criminal proceedings against Nizamov. According to a report by The Economist, he posted an amateur video in the spring to attract comrades. It shows how three refugees in the region of Malko Tornovo were brutally bound with cable ties. The refugees allegedly reported to police that the troop had threatened them with a pistol and knives, in addition to searching for money and valuables, according to the British paper.

The ex-frontwoman of Pegida, who recently was expelled from the leadership of the anti-Islam movement in a dispute with Lutz Bachman, posted pictures on Facebook and extensive reports of her Bulgarian excursion. She herself is wearing a camouflage suit on the pictures; some of the men of the vigilante group are disguised. In front of the public in Leipzig — there are about 300 people in the Plaza — she explains: “Should I trip through the bush in a pink T-shirt and high-heeled sandals?”

Whether Festerling’s call to join the paramilitary vigilantes in Bulgaria will have legal consequences remains undetermined. In the Criminal Code, Paragraph 109h reads: “Whoever recruits a German to military service in a military or military-like establishment for the benefit of a foreign power will be penalized with a term of imprisonment of three months to five years.” Even an attempt to do so is a criminal offence.

[Propaganda pictures of the paramilitary vigilante group from #Bulgarien, with which Tatjana #Festerling allied herself. 2:23 p.m. — 3 July 2016]

As described by the former AfD politician from Hamburg, the operations are covered by the law. “Bulgarian volunteers” would “track down illegals in a completely legal manner and without weapons and hand them over to the border police,” Festerling said in Leipzig. However, videos posted on the internet by the troop itself show fighters with guns and also doing target practice. The FAZ reports that the vigilante group appeals on its internet page to all compatriots to protect the southern border of Bulgaria and the fatherland and to free the world “from the slavery of the Zionist international financial mafia.”

Bulgaria’s Premier had at first praised the vigilante groups

Bulgarian Premier Boiko Borissow did in fact at first praise the vigilante groups as reported in the spring in an ARD report: “Any assistance to the police, the border police and the state is welcome,” he said. “One must just not overstep one’s authorization or the law. The state belongs to all of us. Everyone who helps deserves a thank you.” The Opposition severely

criticized Borissow at the time; the Bulgarian Helsinki Committee brought an action against him for supporting the migrant hunters. 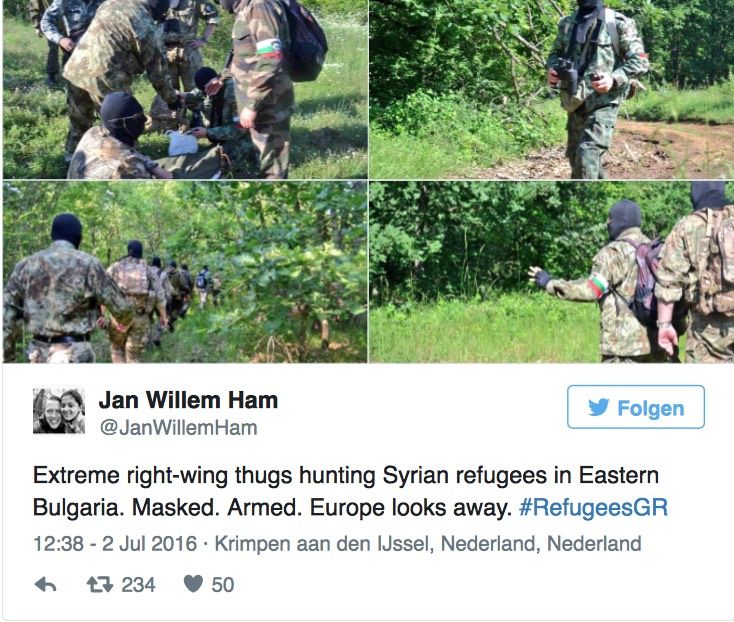 Festerling speaks for a total of 23 minutes at the Pegida chapter. She predicts that “in the next few years, 540 million Africans would be on their way to Europe.” “Ugh!” shouts the audience. The public, however, according to the ex-Pegida leader, would “ridicule” the reports of her Bulgarian patrol “with the usual German dogmatism and presumptuousness,” while she and her comrades would be confronted with hate messages and even death threats. Presumably, “the left-green filthy media” even wished for “someone to do the dirty work and silence us.” She explains, “But you know something. We don’t give a damn. We are ready (…), if necessary, to give our lives.” Her supporters applaud.

4 Replies to “Vigilante Groups in Bulgaria: Ex-Pegida frontwoman wants to give her life, “if necessary,” in the fight against refugees”