1, Just Trudeau handed an easy question about Islamic terrorism and manages it in his own unique style

(A Brazilian magazine actually decided to do a story on Justin. I mean a real one, not a fashion spread. Here is the whole thing for those with the intestinal fortitude)

Also a 6th Muslim was arrested who was part of Sharia for Belgium. (Not that this means Islam has anything to do with his arrest  or his actions of course.)

3. German nationalists march against the Islamic refugee tidal wave. (Notice the man in the Israeli shirt. It translates from Hebrew as: “The State of Israel” These are classical liberals even if they chose a rather unfortunate font)

(The people who did this, I bet they catch. My theory is that they do not seem to catch the ones who light up ‘refugee’ centers as typically those are the refugees themselves so that they can be released into the general population. But the ones against Islamic interests, those they will catch. As I have written on a dozen occasions and say every single day, the most potent aspect of a totalitarian state is selective enforcement.)

5. Anne Marie Waters: “I used to be a feminist, but I gave it up so I could speak out for women’s rights”

The protest,which took place Wednesday morning is, like many others from the ‘hipster right-wing’ Identitarians, a strong statement against the creeping Islamisation of Europe that has been accelerated by the migrant crisis and the arrival over over one and a half million people, mostly Muslims.

Breitbart London talked with Martin Sellner, leader of the Vienna branch of the Identitarians, who was involved in the protest and filmed the entire event on his go-pro camera. Describing the event he said: “We occupied the roof and about 30 supporters gathered with flags shouting slogans. Our main message was: their policy imported is terrorism. They have no right to feel “sorry” for the victims because they bear a great deal of guilt. They have blood on their hands and now we put blood on their roof.”

Banner reads: ““Islamisation Kills”. (If only that was the worst it did)

According to the Halifax Regional School Board, refugees began registering at Chebucto Heights, located in the Cowie Hill neighbourhood of Halifax, in mid-February. (STAFF)

Reports of students choking, pushing, slapping and verbally abusing their fellow classmates are causing parents to worry about the school’s disciplinary action.

“There has always been some fighting and bickering going on at the school but never to this degree,” said Missy, the mother of two children who attend Chebucto Heights. She asked to be referred to by her nickname for this story.

Missy said her daughter, who is in Grade 3, was choked on Monday and Thursday last week by two refugee boys. A chain was used on both occasions, but she cannot confirm the size or strength of the chain. She said one boy yelled “Muslims rule the world” while choking her daughter. School staff intervened, but to her knowledge, the students were not disciplined further.

A Facebook page has been set up praising the self-proclaimed killer of Glasgow shopkeeper Asad Shah.

The disturbing social media page – with more than 700 ‘likes’ – describes Tanveer Ahmed as a ‘public figure’.

It refers to the 32-year-old taxi driver from Bradford who is accused of murder as ‘Ghazi’, a title given to Muslim warriors or champions.

The page has been branded ‘propaganda’ which is encouraging extremism by some of those calling for it to be taken down.

On Wednesday, Ahmed appeared to say he killed Mr Shah in a statement read outside court. In it he said he did it because the newsagent had claimed to be a prophet. 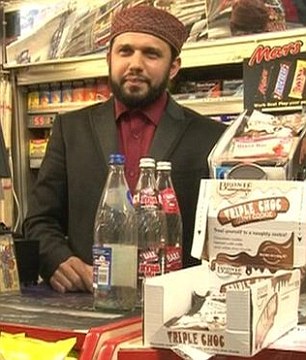 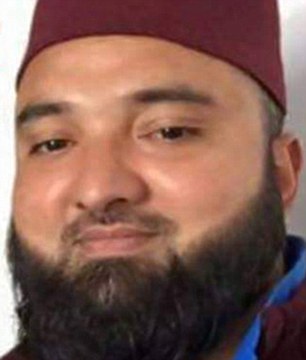 Mr Shah – a Muslim belonging to the Ahmadiyya Islamic sect which preaches ‘love for all, hatred for none’ – was stabbed and killed outside his store in the Shawlands area of the city last month.

Police confirmed the man arrested in connection with the murder was also Muslim and described the attack as ‘religiously prejudiced’.

(This is no small thing. It is one small step behind the mobs in Pakistan cheering, celebrating and lionizing the man who murdered the state governor who was planning to let a Christian accused of blasphemy off from the mandatory death sentence under sharia. Britain is months away from that now. And that means months away from mob based sharia law.)

Thank you M., Buck, Richard, Wrath of Khan, Kathy, Pym Purnell, and many many more. More to come later today.

I normally don’t go for stuff like this, unless I make it myself that is, but every-time the person playing the imam says: “Less precisely” it does make me laugh

13 Replies to “The gulf between what is true and reasonable and the official narrative grows wider: Links 1 on April 9 – 2016”