2. Plan to serve ‘English breakfast’ of bacon and eggs at EU summit BLOCKED by Brussels rules 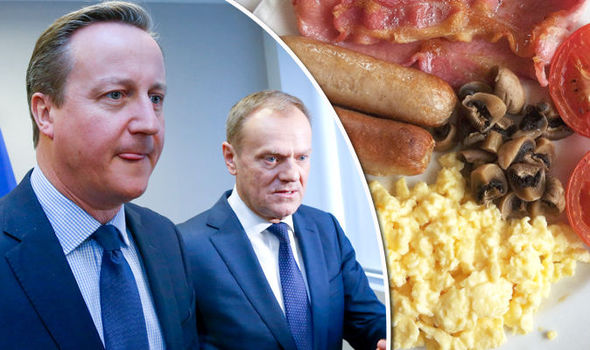 At a crunch summit last week, from which the Prime Minister finally walked away with an agreement on his reform demands, European Council president Donald Tusk had planned for EU leaders to sign-off a deal at breakfast on Friday morning.

Due to Mr Cameron’s lengthy overnight bargaining with other EU leaders resistant to his demands, the breakfast ended up being repeatedly delayed; first to brunch, then lunch and then dinner.

But, even if Brussels bosses had stuck to their original timetable, initial proposals to serve national leaders a ‘Full English’ of sausages, bacon and scrambled eggs would have been undone by EU red tape, it is reported.

(It was pretty obvious from the start that the referendum promise was leverage for some heinous deal that the British PM was trying to work with the EU. If it happens, trying to unrig it will take a lot of effort and planning)

3. German Govt Has New Trojan Horse Malware To Spy On Citizens’ Calls, Typing AND See Through Their Cameraphones

(Passing this story through our local info-security expert. But meanwhile it may be a good time to put a bandaid over your phone cam lens. As far as I know not even the NSA can get around that yet till they install infra-red sensors on your phone. Those outside of Germany are no safer as all these nations have deals to spy on each other’s citizens and pass notes back and forth to seem to avoid the letter of the law about spying on nationals while flagrantly breaking the spirit of them. This is wrong and a bad thing even if at the moment you live in a state that is still spying on actual terrorists and not people who believe in classical liberalism and rule of law. Because once the wall between lawless police state activity and democratic procedure comes down for one, it comes down for all)

Germany’s Federal government has announced it’s new “trojan horse” computer software which will allow it to spy on citizens computers and smartphones.

The German Interior Ministry has formally announced that they have created a new “Bundestrojaner” or government trojan horse software to enable them to track the communications of anyone that downloads it according to the German press, in addition to purchasing an “off the shelf” tool from a company which is said to help authoritarian regimes track their citizens.

Trojan horse software is malicious software (often called malware) that is disguised as something innocent like a free screen saver or game. Once the user opens the file the malicious code infects the target computer, often allowing the person who created it access to all kinds of information like being able to record keystrokes, browse files and more. 4. Riot in refugee camp sees 100 migrants attack each other with chairs and bins after Syrian girl refused to wear a headscarf

Some 100 migrants rioted in a refugee camp in Belgium after Syrian and Iraqi migrants clashed with Afghans because a young girl was not wearing a headscarf.

The young Syrian girl at the centre of the dispute had been targeted by the Afghans for days over her refusal to wear the headscarf, an item of modesty clothing often enforced in Islamic countries.

But when she was defended by her fellow Syrians, a riot erupted which saw the groups of migrants attacking each other with rubbish bins, chairs and broomsticks.

(The irony here is that should a Danish citizen tell the truth about the whats, why’s and who’s of this on their own Facebook page, they could be fined and possibly even arrested for it. So I guess they can deal with reality for the moment, they just can’t talk about it. Which of course is a precursor to not dealing with it)

A public swimming pool in southern Denmark has expelled asylum seekers after continued complaints about their behaviour and will now only let them in during special hours.

7. Afghans protest not being allowed to claim they are refugees now at the Greek-Macedonian border

8. Migrants resist being moved away from the Macedonian border

Thank  you Richard, M., Wrath of Khan, Kathy and many more and more to come.