1. Copenhagen terrorist had Quran during attacks

(Which is the more criminal I wonder? The politicians for telling media to hide this important fact for the public good, or the media for obeying political instruction and not doing their job or their responsibility to the public by informing them of that which they need to make healthy decisions) 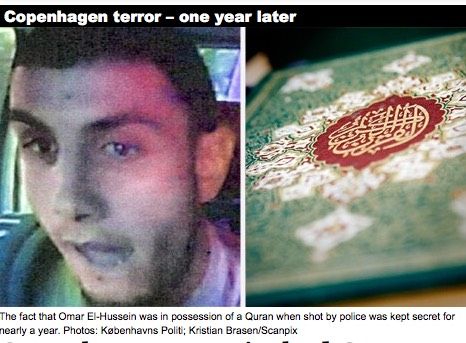 Radio24syv revealed that Omar El-Hussein, a Danish citizen of Palestinian origin, was carrying a copy of the Quran when he was shot and killed by police in the wee hours of February 15, 2015, information that had been kept secret by Danish authorities.

According to the radio station, at the time of his death El-Hussein had a Quran on him with a bookmark at Surah 21, ‘The Prophets’, which contains verses about disbelievers of Islam.

A theologian and expert on the Quran at the University of Copenhagen said that although one cannot definitively prove that the 22-year-old El-Hussein was inspired by the scripture, the location of the bookmark could be significant.

2.  Canada to leave multi-nation mission against the Islamic State, but to bring 6000 muslim migrants and house them at Canadian military bases.

Thank you M., Richard, Maria J., Wrath of Khan and all. I think 2 items are enough for this post. Especially if you are trying to keep your blood pressure in the green to orange range.

Here is an interesting and worthy interview with a man who just wrote a book on Critical Theory and post modern culture. Its quite enjoyable. Not embedable though so click over to source. The video doesn’t appear in my FIREFOX I think cause of an ad blocker but it does in other browsers.

10 Replies to “Muslim killer in Denmark last year had a koran, Canada to turn military bases into islamic community centers with mosques halal: Links 2 on Feb. 8 – 2016”