Obscene comparisons by Burkhard Jung the Mayor of Leipzig over the breaking of a couple of kebab shop windows. 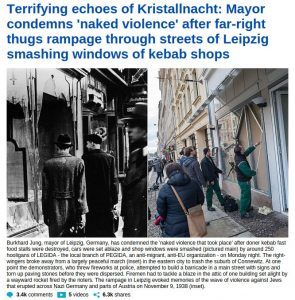 Kristallnacht was carried out by a paramilitary force, with support from the police and authorities, on that night 30,000 Jews were arrested and later perished, 1000 synagogues were burnt down as were 10’s of thousands of Jewish owned homes and businesses. and the name Kristallnacht comes from the fact that the cities streets were carpeted with broken glass.
The comparison is an obscenity and I have not seen one person dare call him out on it, and that is how the lying media are used against us, no-one will dare question the lies told about PEGIDA being the new nazis which the rest of this article twists the events to “prove”.

And lets not forget why the people are angry as the press would like us todo, 1000 muslim men (in one city alone) conspired to mass rape the local girls when they were out celebrating the new year AND the authorities with the assistance of the press attempted to cover it up.

as I say, an obscene comparison.

9 Replies to ““Terrifying echoes of Kristallnacht””