Somalia’s security forces on Monday arrested an American who was fighting with the Islamic extremist al-Shabab group, says an African Union official.

The American was arrested in the southern port of Barawe, 10 miles (180 kilometers) southwest of Mogadishu, said Njuguna.

Jones claimed he fled al-Shabab because of rifts within the rebel group, said an official with Somali security forces who insisted on anonymity because he is not authorized to speak to the press. Jones is missing the index finger of his right hand, said the official.

2. Angry Migrants Kept Out of Macedonia 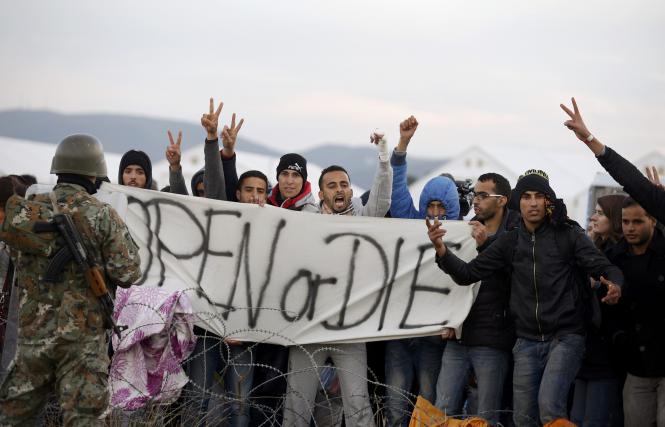 In the last few weeks watertight doors have been clanging shut all along the route taken by the “refugee” flood of that’s been overflowing Europe since the middle of last summer. The point of entry is Greece — specifically, the Greek islands in the eastern Aegean — and the last border that has been tightened is the first one the migrants have to cross, the one between Greece and Macedonia.

The Macedonian government has put up razor-wire barriers and placed restrictions on which asylum-seekers may enter. Needless to say, the “refugees” are unhappy, and are making their feelings known. “Open [the border] or die” — yep, that’s the sort of sentiment that’s bound to melt the hearts of Europeans and cause them to welcome the “New Europeans” into their homes and larders.

3. Ted Cruz challenges the Attorney General on her claim that she will suspend the 1st amendment for those who criticize islam and have them arrested. (The personification of UN resolution 16/18)

4. Here is a stellar example of bias in journalism. To be frank its so unsubtle its almost desperate sounding. Notice how CNN does typical reporting (more or less) on Trump followers view’s on his no muslim immigration policy till this war is sorted. They find one guy they can make look like an idiot. Ok thats been the normal for media for a long time now. But then a woman gives a reasoned argument and the narator of the piece cuts in and argues with her, not there during the interview, that might be acceptable. But in the voice over. The anchor actually says: “That’s not true” about the interviewee’s statement on vetting immigrants and to make matters worse, does not counter it with an argument but by repeating the Obama claim on it with no substantiation. In fact I think it was the director of the FBI said vetting these migrants was impossible as they are not on any database.

6. The Jerry Lewis like guy who sold the guns to the San Bernardino jihadis was a convert to islam. Wadaya know. The day after Thanksgiving, in the wake of a terrible shooting that left a Muslim cabdriver in Pittsburgh hospitalized, CAIR was screaming ANTI-MUSLIM HATE CRIME! Naturally, left-wing news outlets like the Washington Post and others gleefully accepted those marching orders.  Five days later police had a suspect in the shooting. He’s pictured above. His name is Anthony Mohamed.

Investigators have taken a suspect into custody in the shooting of a cab driver who is Muslim in the city’s Hazelwood neighborhood in the early morning hours of Thanksgiving Day.

Syed Rizwan Farook, one of the shooters last Wednesday in San Bernardino that left 14 dead and 17 injured, received a wire transfer of $28,500 just two weeks before his fatal attack.

Fox says FBI investigators are still trying to determine whether the money was a loan or perhaps came from a different source.

Merkel should draw a line for an upper limit. Many sitting on their suitcases in the middle east waiting to get going.
The one million migrants in Germany hconstitute only those who have registered. Another 300000 have not registered.
If you haven’t lived there for three months you cannot work.
Nobody likes Merkel anymore.  She’s a dictator. Germans waiting for a change.
According to German law someone who rapes a 14 year old little girl won’t be deported but will remain an eligible immigrant with a civil charge only.
Bucharest: 17 year old Romanian convert being watched. He is sending Internet messages inciting attack. He is an ethnic Hungarian.

10. ‘It’s a religion that thinks that you can kill in the name of God’: Former prime minister Tony Abbott claims Islam needs to reform and argues ‘all cultures are not equal’

The ex Liberal leader, who was ousted by his own party in a dramatic leadership spill on 14 September, spoke at length about his views on the religion in a Sky News interview on Tuesday night and followed it up with a strongly-worded newspaper opinion piece on Wednesday.

‘All cultures are not equal and, frankly, a culture that believes in decency and tolerance is much to be preferred to one which thinks that you can kill in the name of God, and we’ve got to be prepared to say that,’ Mr Abbott told Sky’s Paul Murray.

He reasoned that Islam has ‘never had a Reformation, an Enlightenment, a well-developed concept of the separation of church and state’ and ordered ‘that needs to happen’.

In a column for The Daily Telegraph he went even further, claiming: ‘We can’t remain in denial about the massive problem within Islam.’ 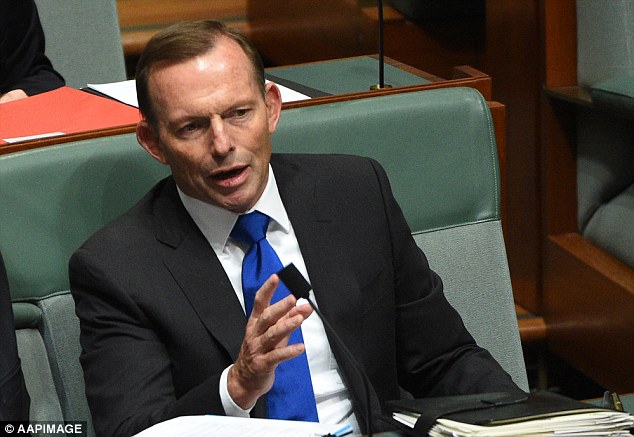 (Dear former PM Abbott: Islam has a built in failsafe on page 1 of the koran. It cannot be reformed. It is what it is for all time. Those who attempt to mitigate or soften or transform teh message is murdered as an apostate or worse. Ask any Shiia in Sunni territory)

There is a lot more to come. A story just released on Tundra Tabloids about an incident in Finland needs all the attention it can get for obvious reasons and less obvious ones. That link was just posted but I think it deserves a couple of comments and an essay or two at least.

Lastly, here is a segment of a gathering arranged by Frank Gaffney featuring Admiral Ace Lyons, first posted in Feb. 2015. It has at last check over 2.7 million views. To all who saw this and he sounded not fully rational, it may be worth seeing again with the perspective of events which have taken place since this was delivered and another assessment made of it.

One Reply to “Americans defy Lynch’s attack on the 1st amendment and the Finnish illusion of multiculturalism turns to fascism to preserve: Links 1 on Dec. 8 – 2015”