The 43-year-old has been detained afte racist messages were posted on the Blinks of Bicester Facebook page, which said people of “Islamic faith” were no longer welcome.

An avalanche of people on social media condemned the posts, which said it was “time to put my country first”.

The posts read: “Blinks of Bicester are no longer taking bookings from anyone from the Islamic faith whether you are UK granted with passport or not.”

Another said: “Sorry but time to put my country first”.

The woman, from Bicester, Oxfordshire, is being held by Thames Valley Police.

(wow! She is in custody! What if she said no Nazis or no communist! Someone really has to try that. Saying they will not serve communists or Nazis and see if they get arrested.)

More than a dozen military weapons are missing after an overnight break-in at a Massachusetts army reserve center, officials said.

FBI agents were looking into the gun heist, Hank Shaw, special agent in charge of the FBI’s Boston division said. Shaw said the break-in is not being considered as a terrorist threat.

(the above link is basically a live blog. Check events over there)

And now, on to some Canadian news:

5. Terrorist threat to Canada has ‘never been as direct or immediate’: CSIS boss

As youths arrested for terrorism appeared in courts in Alberta, Quebec and the Maritimes on Monday, the director of Canada’s intelligence service testified in Ottawa that the country was facing an unprecedented terrorist threat.

“In addition to complex plots involving multiple threat actors over a prolonged period, we must also be alert to rapidly escalating threats posed by individuals determined and able to act with little or no warning or support,” he said.

Canada has seen both in recent months: the conviction of two men who plotted with al-Qaida to derail a Toronto-bound passenger train and the lone-wolf attacks that killed two Canadian Forces members in Ottawa and Quebec.

The so-called “foreign fighter” phenomenon has become a growing concern for the intelligence community, stoking fears that individuals could return to Canada more radicalized than when they left.

“Most troubling, if they participate in a foreign conflict or train with a terrorist group, they might return with certain operational skills that can be deployed themselves or taught to fellow Canadian extremists,” the Canadian Security Intelligence Service said in its annual report released earlier this year.

Talk radio host Laura Ingraham live-tweeted a security incident early Sunday evening about an American Airlines plane as it was preparing to depart for Boston from Reagan National Airport, which is just across the Potomac River from Washington, D.C.

Ingraham reported that Flight 2124 was evacuated at the departure gate with police and bomb sniffing dogs searching the plane.

9. Radical panellists at ‘Quiz a Muslim’ event demanded establishment of an Islamic State in Britain as jihadists went on bloody rampage through Paris

As jihadists rampaged through Paris on Friday night, radical panellists at a Muslim debate in Britain reportedly told of the duty to establish an Islamic state.

The panellists said that there is an ‘Islamic’ duty to ‘struggle’ for an ‘Islamic state’, as 132 were executed in shootings and suicide bombings. 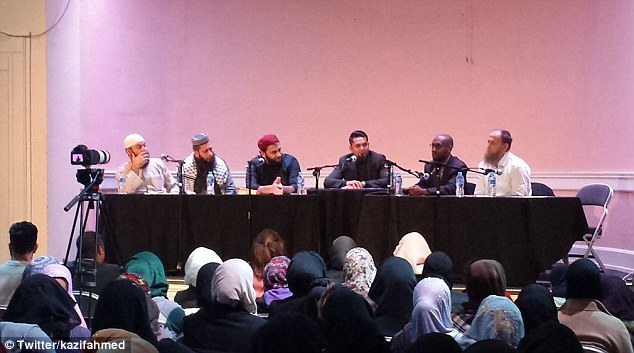 10. Labour MP Keith Vaz would have “no problem” with reintroduction of UK blasphemy laws

(It seems next to impossible to get the authorities to recognize that the problem is not geopolitical but ideological and the people who are a threat are the ones who hold and promote that ideology in any way, most of them more dangerous than kinetic jihad as we saw in Paris. This story is a sterling example)

Labour MP Keith Vaz has expressed his support for the reintroduction of UK blasphemy laws – provided they “apply equally to everybody.”

His comments were reportedly made at an event organised by the Muslim Council of Britain to explore responses to terrorism and extremism, held in London on 12 November.

During discussions on how to respond to ‘slurs’ and “grossly irresponsible” coverage of Muslim issues in the media, attendees called for Britain’s Independent Press Standards Organisation (IPSO) to be given powers to pursue complaints of discrimination against groups of people, such as those of Muslim faith, if no individual is specified in an offending article.

Miqdaad Versi, Assistant Secretary General of the MCB, said “Muslim communities need to be able to respond to accusations [against] Muslims, or against the Prophet, in a more effective way.”

He added: “Whether there should be legislation is something that really is a more complicated question.”

Thank you M., Pym Purnell, Wrath of Khan, ML., CB Sashenka, SC., and a host of others including Oz-Rita, Gates of Vienna and others who have worked in front and behind the scenes to bring clarity and real information and occasionally a little analysis.

A lot of that analysis basically dances a Jig around one point and that is the deflections and misdirections of govt, and official media on the nature of this threat, which no longer can be denied altogether as Paris reminded us of again till the BBC manages to lull us back to sleep again, so instead the misdirection is using a geopolitical model instead of the factual ideological one. If you admit that islam is the motivating ideology and source of all this then you have to deal with a problem that is mighty inconvenient and gets messy. But if you can attach a more familiar model to it then one can pretend to deal with the problem by dropping high-energy chemistry projects on a longitude and latitude and not lose too too much political capital. Maybe even gain a little. Here is a fantastic example of where the media is making it look like they are holding the White House’s feet to the fire for saying that “the Islamic State is contained” when clearly it is not. When in fact the real issue is that none of the attackers likely lived in the Islamic State now or ever and likely wouldn’t want to if given the chance. But all of them are deeply dedicated muslims. All of them. To quote another article to cross my desk today, none of the terrorists are Buddhists, Christians, Jews or anything but religious Muslims. A fact that apologists ignore at our peril, and try and jail us when we point it out.

3 Replies to “The socialist forces begin to arrest those who start to behave rationally towards Islam: Links 1 on Nov. 16 – 2015”