1. Iran: Amputation Was Carried Out Following the Court Decision

Iranian authorities have amputated a hand and a leg from opposite sides of a thief in the prison, cutting off the hands or legs thieves “allowed under the Iranian judiciary’s grim underneath of Sharia Law “has seen lately in the country.

An offender forcibly lost his left leg and his right hand on Monday morning on 3 August 2015, Branch 2 at the Islamic Revolutionary Court of Mashhad held the verdict as legal punishment under Islamic Penal Code, still the other offensive on row the resembling sentence.

There are no details on how the penalty was carried out.

Iran’s Law Enforcement Forces arrived at the incident scene after a witness calling, and they succeed in grabbing the thieves after few hours according to the witnesses quoted by news agencies.

2. There is no escaping the Calais migrant invasion. This video presents a very sympathetic view in favour of the invaders.

2b. They did manage to make a mosque and a ‘school’ and as any even occasional reader of this or similar sites should be confident about what is taught at mosques and islamic schools, it is also safe to estimate what kind of contribution these people would make to a free society with free range infidel children on every corner.

Bulgaria has installed a barbed-wire fence on its southern border in an effort to prevent a further influx of immigrants into the European Union’s poorest member state.

The 33-kilometre (20.8-mile) long and three metre (10 feet) high fence, which was completed on Thursday, has cut the number of illegal trespassers to 300 a month, down from 2,000 people per month last autumn, according to officials.

“The main purpose of this facility is to redirect them to the border checkpoints where they can legally enter the territory of the Republic of Bulgaria in the way it is done in any other country,” he said.
Bulgaria was caught unprepared last year by a surge of 11,600 refugees, mainly Syrians, which was 10 times the annual number of refugee seekers ahead of the Syrian war.

While officials are proud of the “iron guard” on the border with Turkey, rights agencies have been criticising Bulgaria and other EU members for denying access to people in need before they can apply for refugee status.

4. In another stunning example of selective enforcement of ‘hate-crimes’ laws in Canada, police refer to this as an act of vandalism, while an empty bag of pork rinds within 1 mile of a mosque is a group W bench offense. 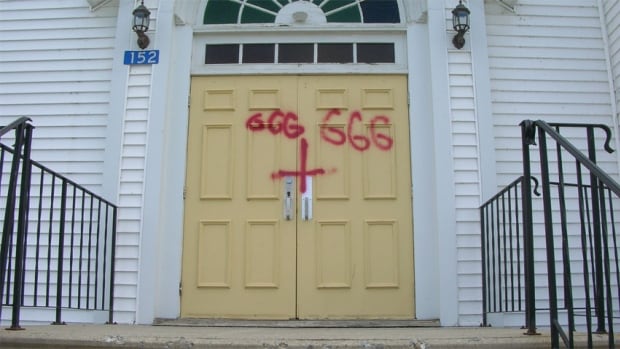 The RCMP are investigating after someone spray-painted “666” and an upside-down cross on the front doors of a Catholic church in western New Brunswick over the long weekend.

Police were called to the church in the Village of Bath on Aug. 1, at about 8:45 a.m., RCMP Cpl. Jonathan Holmes said in a statement.
Bath crossing sign vandalized

Police believe the same red spray-paint used to vandalize the church on Church Street was also used on this crosswalk sign, which is located on the same street, a short distance away. (RCMP)

Each of the yellow doors of the church, located on Church Street, had been emblazoned with “666” in red paint, while a red upside-down cross was painted between the doors.

5. Slovakians vote ‘no’ to taking in Austria’s homeless asylum seekers

A village in Slovakia has strongly rejected Hosting asylum seekers to ease pressure on overcrowded shelters in neighboring Austria. The plan, approved by the interior ministers of both countries, was put to a local vote.

6. Child Marriages Form 15% of All Marriages in Egypt

Fifteen percent of all marriages in Egypt are child marriages, announced Egypt’s Minister of Population Hala Youssef on Thursday.

Despite Egypt changing the legal age of marriage to 18 in 2008, child marriage continues across the country and particularly in underprivileged areas, said Youssef.

According to a study published by the National Council for Women in 2013, 22 percent of girls are married before the age of eighteen.

Following the new revelations, Egypt’s Population Minister announced that the government, in cooperation with the Central Agency for Public Mobilization and Statistics (CAPMAS), would commence a new study that would determine the scale of child marriages in Giza, Assuit, Sohag and Sharqia.

There should be one or two more titled videos soon as well. So not done for today quite yet.