Obed Bapela, a deputy minister in President Jacob Zuma’s office, charged the students, who visited Israel recently under the auspices of the South Africa Israel Forum, with bringing the ruling African National Congress into “disrepute” and said the party would “summon” them to an investigation.

The director of the South Africa Israel Forum, Dan Brotman, told Haaretz that “some of the participants, who will be future leaders in South Africa, were under enormous pressure not to come or received threats over being kicked out of their political parties.”“The goal is not to make them pro-Israel, but to expose them to a narrative they really don’t hear in South Africa,” he said.

2. A couple of clips from This Week in Islam

3. Animated map shows how religion spread around the world. 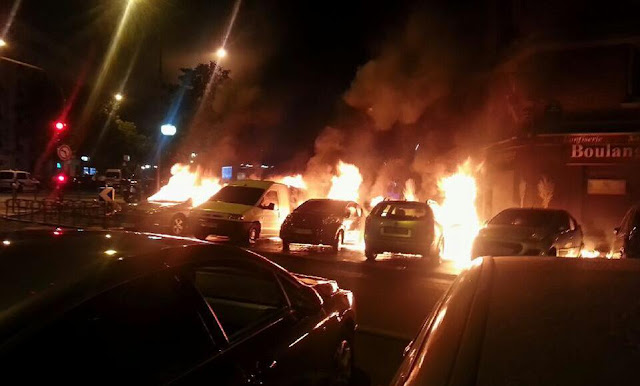 (This is amazing. Not only is he doing the right thing, showing that he understands the situation, but stunningly, he is specifically also not doing the wrong thing)

Lord Weidenfeld is funding a rescue mission of up to 2,000 Christian families from Syria and Iraq.

But the project has faced criticism over Lord Weidenfeld’s decision not to include Muslims in the rescue effort.

The United States refused to take part and other countries made claims of discrimination.

Funding was also given by other Jewish philanthropists and charitable groups such as the JNF, and aims to offer 12 to 18 months of support to the refugees.

Lord Weidenfeld defended the project and said: “I can’t save the world, but there is a very specific possibility on the Jewish and Christian side.

“Let others do what they like for the Muslims.”

6. Breitbart on the attack in France today

(City councils the world over must be green with envy)

“Daesh arrested 355 shop owners in Mosul after they refused to pay zakat to the group,” said Saad Mamuzin, spokesman of the Kurdistan Democratic Party (KDP) in Mosul, who lives in the Kurdistan Region since ISIS seized the city in June last year.
He added that ISIS had previously warned it would punish violators.
“Anyone who violates the ISIS decree is imprisoned by the group,” Mamuzin said, explaining that detainees have been taken to unknown locations and their fate is unknown.

Thank you M., Gates of Vienna, CB Sashenka, and more.

If I seem to have taken a slightly acidly comical approach occasionally to serious issues, its because shouldering the full and true nature of the horror of the situation of the world today, not just the acts of muslims advancing islam or left wing extremists etc. but Obama and his calculated destruction of the power of liberal democracies from giving the codes of British nuclear weapons (yes you forgot about that didn’t you i bet?) to unilaterally degrading the strategic weapons of the US, and trashing all alliances in favour of terrorist states and radical islam is, frankly, more than I can take all at once and all day long.

5 Replies to “Geopolitics: There is no fictional scenario that can compete believably with the potential today that doesn’t have aliens: Links 4 on July 15 – 2015”