The Quebec government has granted imprisoned Saudi blogger Raif Badawi a selection certificate, a first step meant to speed up his immigration process. 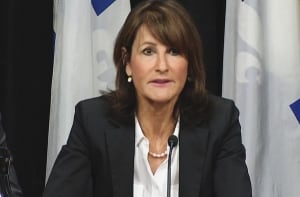 “Quebec is behind Raif Badawi,” said Immigration Minister Kathleen Weil, who used a special discretionary power to grant the certificate.

“His treatment is outrageous — it’s cruel and unusual punishment,” she said on Friday.

She made the announcement alongside members of other provincial political parties — a demonstration of non-partisan support for Badawi, she said.

(notice the face has a blur applied to it in the article. Oh what wretched creatures we have become)

The billboard shows an angry, sword-wielding, Muhammad that is being drawn by a hand. The text coming from the Islamic Prophet says, “You Can’t Draw Me,” with the response of “That’s Why I Draw You.”

The signs also features the seal of the American Freedom Defense Initiative (AFDI) with “Support Free Speech” written above it. The AFDI website says the picture was the winning entry of a Muhammad drawing contest in Texas, in May –the same contest where two Muslim extremists were shot and killed after they opened fire on a security officer.

Many Muslims consider drawings of Muhammad to be blasphemous and are banned in the Islamic Faith, which is why Local 24 chose to blur the pictures.

The Baxter Bulletin and Answer Dude, Thomas Garrett, took photos of the signs while they were still visible and shared them with our sister station KOLR10.

Meanwhile, a muslim group put up some billboards telling outright lies about islam and of course, they will be perfectly safe. At least in terms of the law and the people hosting them…

3. Indian PM tells 2 very verifiable truths about Pakistan for which, Pakistan does not react well.

BENGHAZI, Libya, June 12 (Reuters) – Seven people were shot dead on Friday at a protest against Islamic State in the eastern Libyan city of Derna, residents said.

The protesters marched after Friday prayers towards the militant group’s main base in Derna when gunmen from there opened fire into the crowd, several residents said, adding about 30 people were wounded.

Islamic State and other Islamist groups have been fighting for control of the eastern coastal city. (Reporting by Ayman al-Warfalli; Writing by Ulf Laessing; Editing by Janet Lawrence)

Bahrain has jailed 57 Shia citizens, and stripped all but one of them of their nationality, for an alleged plot to bomb sites across the kingdom.

The state news agency, BNA, said the group plotted to attack “policemen… vital sites and security locations, including an embassy”.

The Gulf state has seen sporadic unrest since putting down mass Shia-led protests in 2011.

In the latest case the defendants were given sentences ranging from three years to life in prison. Activists said minors were among those jailed. Four people were acquitted.

Among the group’s targets, the Gulf Daily News reported, were the Saudi embassy in Manama and the King Fahd Causeway connecting Bahrain and Saudi Arabia.

(He seems to have it pretty much spot on)

It is not clear which armed group is involved in the siege.

Tunisian authorities say they will “do whatever needs to be done” to secure the employees’ release.

(If it had been Bush that messed up Libya like Obama did, we would never hear the end of it)
Thank you Carpe Diem, M., Wrath of Khan, GoV., CB Sashenka and many more who have contributed today. More to come including a new Geert Wilders speech on EU forced immigration.