UN spokesman: Ban deems the 1915 Armenia genocide as an ‘atrocity crime’ and a ‘tragic event’

United Nations spokesman Stephane Dujarric said on Monday Secretary-General Ban Ki-moon deems the 1915 Armenia genocide as an “atrocity crime” and does not follow Pope Francis’s labeling of the incidents as “the first genocide of the 20th century.”

Dujarric said the UN general secretary described the incidents as “tragic events” and “atrocity crimes” refraining from taking sides in such a sensitive matter that has been politicized.

He also added that Ban believes that the commemoration and continuing cooperation between Armenians and Turks “with a view to establishing the facts about what happened should strengthen our collective determination to prevent similar atrocity crimes from ever happening in the future.”

(History of the Armenian Genocide)

2. Wiped from the face of the earth: Horrifying satellite images show city in Nigeria reduced to rubble by Boko Haram as it emerges militants have abducted 2,000 women in just 12 months

Shocking new satellite images have emerged showing the devastation wreaked by Boko Haram fighters on Bama, a city in northern Nigeria, over a period of six months.

Bama, the second largest city in Borno state, was left decimated after thousands fled or were gunned down in the street by Boko Haram fighters as they overran the troops stationed there in September 2014.

The militants, who recently swore allegiance to ISIS, slaughtered civilians, burned women and the elderly alive inside buildings, and forced people to convert to their strict vision of Islam.

In March, Nigerian troops regained control of the city. Knowing they were going to be defeated, the Islamist fighters fled, burning as they went, leaving almost three quarters of the once thriving city in ruins.

The images have been released as part of a new report by Amnesty International, which reveals that at least 2,000 women and girls have been abducted in a reign of terror by Boko Haram in Africa, with many being forced into sexual slavery.

(Photos and video at link)

An Indian salesman is facing seven years in prison and a fine of up to one million dirham – around £186,000 – for allegedly cursing Islam and the Prophet Mohammad on Facebook.

The 41-year-old man – identified only by his initials S.G. – is said to have posted a ‘blasphemous’ status on his Facebook page after watching a news bulletin about the war in Iraq on television last July.

If found guilty, the suspect could face up to seven years in jail, a fine of between Dh250,000 to Dh1 million, or both.

4. Beheaded by a masked executioner wielding a meat cleaver: ‘Blasphemer’ executed by ISIS in latest atrocity in Syria

Islamic state militants have released photographs which appear to show the beheading of an ‘alleged blasphemer.’

A series of gruesome photographs show a man being led out of a van handcuffed and blindfolded before he is executed by a masked man, wielding a meat cleaver.

His beheading is believed to have taken place in Hama in Syria.

5. Three-year-old girl found wandering streets alone had been kidnapped from her home then DUMPED in a trash can by her father, officials say Prior arrest: Faiz Ikramulla, 35, was arrested in Mary 2014 in Portage, Wisconsin, for allegedly attacking police during a traffic stop. He is also said to have screamed out ‘God is great’ in Arabic

(It is highly likely that the claim will be made that the man is mentally ill, as they typically do, when a muslim behaves in a fashion which deviates from the narrative of Islam as the religion of peace and equality. Chicago Sun link)

Cardinal Nichols celebrated the Orthodox Easter Vigil Mass with the Bishop of Erbil, Emil Shimoun Nona, and refugees from Mosul. Nichols “heard their Bishop encourage them to be hopeful, to be courageous, to be ready to build again,” even though he knows exactly what the terrorists are doing to their beloved churches:

And this bishop knows that his Cathedral in Mosul is being desecrated and vandalised and provocatively turned into a mosque. He knows it because the ISIS fighters regularly send him photographs of what they are doing. But his faith and courage are undiminished.

(In this video they openly state that Islam is about terrorism and muslims are terrorists. They quote several koran verses establishing this fact. It is also interesting that they state that there is no religion without the sword. It is important to understand that they believe the appearance of the pirate mohamed abrogates all previous prophets and religions and therefore only islam is religion and in that context they are correct. As Islam only spreads by the sword there would be no islam if it wasn’t for bloody conquest)

8. One Iraqi artist does depictions of the community collective horror of contact with the Islamic State on canvas. (Reminiscent of medieval European paintings on same subject) 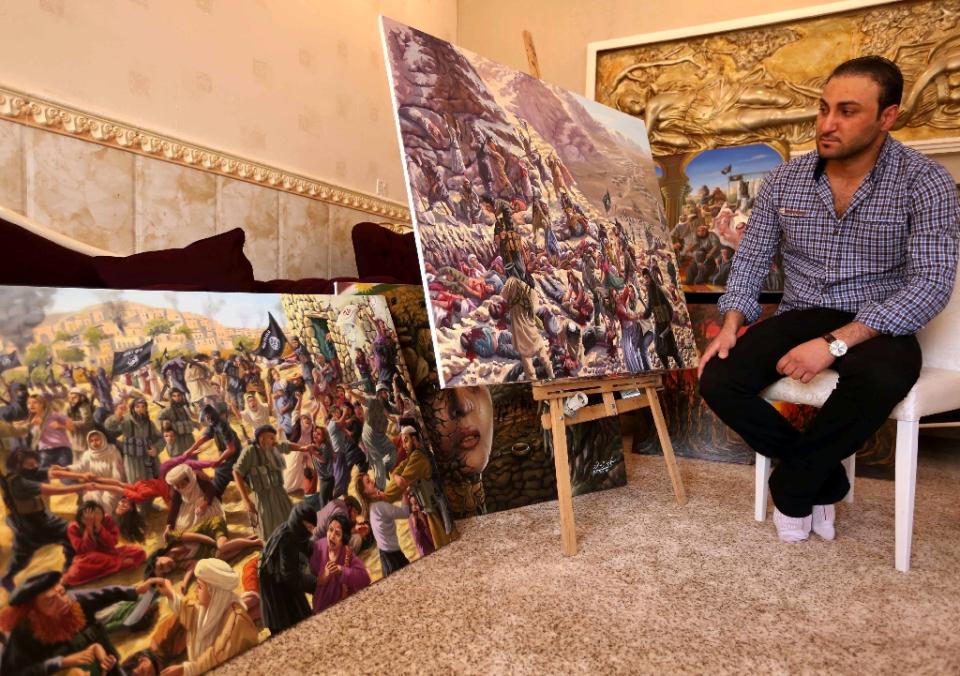 10. This is one messed up Islamic State video. Again though, the images of Koran show important corroborating text with the IS narrative. Specifically, the idea that war for the sake of establishing Islam is in koran and is mandated for all believers. There are rapidly appearing disturbing images of previous IS atrocities and crimes against the dignity of living and dead things however. Islam really is the army of darkness. For those who can stand these kinds of images, it may be worth watching for the rest of the message, namely the sleeper cells and likely upscaling of the muslim war against the rest of us.

(I’m sure once Greenpeace realizes that Turkey is likely building the exact type and size of plant ideal for making weapons grade plutonium for the purpose of leverage or attacking their non-muslim neighbors or possibly Iran, they will drop their signs and go home. That is, unless they are just schilling for the Saudi oil industry like Greenpeace probably is everywhere else)

On their way to Friday prayers at their mosque in Lahore, two young Muslims stopped a 14-year-old boy and asked him what religion he belonged to. When he said he was Christian, they beat him up, threw kerosene on him, and set him ablaze.

The boy, known only as Nuaman, suffered burns covering 55% of his body and is now being treated at Meo Hospital in Lahore in Punjab province.

“I told them that I am Christian. They started beating me, when I tried running, both boys started following me through the street and then they threw Kerosene on me and burnt me,” Nuaman said.

Thank you Buck, M., Tundra T., GoV., CB Sashenka, and all who sent in material. A great deal more to come shortly.

4 Replies to “Muslims become more and more open about ambitions, motivations and more fearless in attacking non-muslims. Links 1 on April 14 – 2015”