2. The Telegraph ; Andreas Lubitz planned spectacular gesture that would go down in history, claims ex-girlfriend

Airbus crash pilot Andreas Lubitz had been planning a spectacular gesture to make everyone “remember” who he was, it was claimed on Friday night.

An ex-girlfriend of the Germanwings pilot who crashed his plane in the French Alps, killing all 149 others on board, described him as “tormented” and able to hide secrets.

Maria, 26 (not her real name), told Bild newspaper that when she heard about the crash she remembered that he had said he was going do something “that would change the system” and “make everyone remember” him.

She added: “It didn’t make sense at the time but now it all does.”

Maria, who is thought to have met Lubitz at work, said he would wake up at night screaming in terror: “We’re going down.”

4. M was kind enough to dig up a translation for the words all over the car burka of the Iranian proxy army in Yemen looting US military secrets. 5. Once again, hundreds of leftist students who are less afraid of tear gas than they are of getting a job and paying for their own stuff, face off against cops in Montreal. Two videos at site.

6. This is a rather staggering example of selective enforcement in France. Women who did highly criminal acts in a Catholic cathedral get off scot free and the security guards get fined for pulling them out, while someone who leaves a pig’s head near a mosque does actual jail time.

7. Interesting interview with the ambassador from the KSA to the US on a possible Saudi nuclear weapon

(This appears to be basically ongoing now) 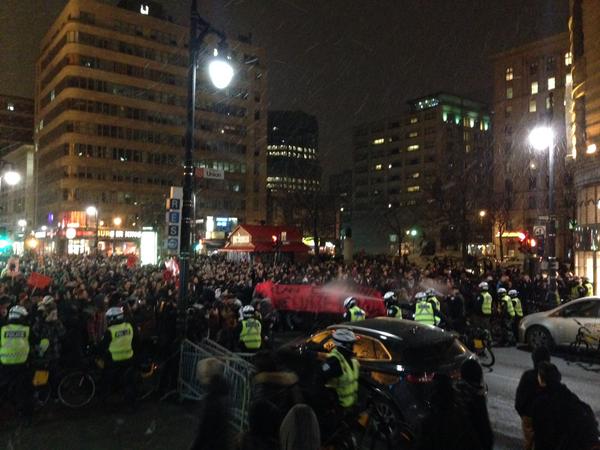 Thank you M., Richard, Yucki, Richard, Alan D. and many more who have sent in links and been part of vibrant and interesting discussions on several topics in the comments.

I would like to add a note of my own on the jet which we can all agree was deliberately brought down by the co-pilot.

Lets say for the sake of argument that he was not a muslim.

The media reaction has been horror, fascination, curiosity and a desperate need to know the motive for this action. This should illustrate something very important about us as a people and even our media, including the parts of the media desperately trying to cover up the nature of islam and worse, act on policies that islam must always be written about as if it was benign and ‘the victim.’

Notice how it is clear in all articles that what this man did was anathema. It was an exception. A crime. Had he done it for jihad, which still may be the case, it would be no surprise to anyone.

The point is that human nature is what it is and each culture or religion is a system which tries to make it all work in some way by emphasizing some aspects of our nature as virtues and others we suppress as sins or crimes or monstrosities. Islam is an inversion of Western culture whether its Judeo-Christian or secular humanist or game theory based logic with an axiom of reduction of suffering and maximizing of freedoms. Islam takes inflicting suffering and makes it a virtue. It calls the murder of other people martyrdom as opposed to our notions, which are the sacrifice of the selves for others.

In other words, islam can be seen for what it is even in the reactions we have to the extremely rare case of a non-muslim committing an atrocious act like this. We know this is not how we think or behave. That it is horrifying to us. We do not celebrate this.

It is also very important to note that some jihadi pages have claimed this man is a hero of islam. What a magnificent example of the raw depravity of that system of living that they would claim as their own with pride and joy someone who is likely not even a member of their cult, but because he committed an atrocity of such magnitude by murdering over a hundred people and from a position of trust, perhaps the worst kind of crime in non-islamic culture, that they would make him an honorary muslim in their eyes.

Few have taken notice of this. But this is a great time for a moment of sober reflection by the media. Often by the mirror image can we better know a thing. The fact that The Islamic State has taken credit for this action is not evidence that he was a muslim by any stretch. But it is evidence that Islam feels this was a great and noble act.

When sunnis destroy and kill shiias, we do not delight in it and say, ‘what a great hero for the West’ even if there is some schadenfreude in it. More typically we would know that this is simply more classical and orthodox islamic behaviour and an example of the reasons we oppose it.

The sheer contrast between how the two sides are reporting on this action is every bit as significant in terms of what it is we wish people to understand about islamic values and the threat they present as if the copilot turns out to be muslim and had waged an act of islamic jihad against the infidel. Perhaps more so. Just as it is that the very first thing everyone asked when this action happened and before we knew anything at all beyond that an aircraft had crashed and there had been some anomalous behaviour by the plane before it went down, is was this an act of islamic jihad? This has a significance all its own. Even the apologists and water carriers were bracing themselves for the likelihood that it was.

Lastly one could argue that islamic actions of mass horror have infected the Western world  now. These kinds of things did not used to happen, no matter how hurt a man was over a rejection from a woman. He may injure himself. He may jon the French Foreign Legion. Any number of extreme actions right up to suicide but I do not recall a hurt lover killing large numbers of strangers before Islam normalized this kind of event. It was utterly antithetical to all our values and never acceptable in any of our literature. Unthinkable. So again, this action provides a great deal of useful information about the effects of, and values of islam and its effects on our civilization.

(This micro essay inspired by conversations with Gates of Vienna)