2. The Netherlands tells immigrants to learn Dutch or leave. The media feels there is something wrong with that and people should be able to go where they want and never respect the local culture.

(You can be 100% sure that the exact same news station would write an equally contemptuous piece about Dutch people who move to Pakistan and refuse to learn a local language or respect local religion and customs. Classic Frankfurt school brainwashing.) 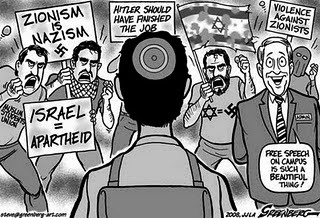 The Students’ Alliance at the University of Windsor in Ontario has just written itself into the annals of infamy by becoming the first university in Canada to vote in favour of BDS via a referendum of undergraduates.

Days before the vote, vandals broke into the locked office of the the vice-president of academic affairs at the university’s Student Alliance (UWSA), Jake DeJong, ransacked it, and scrawled a Star of David and the word “Zionist” on a flag bearing the motto “Support our Troops”.

Thank you all for the links. More to come