Breivik, the Useful Nutcase
by Fjordman

Some readers both at Gates of Vienna and at the Danish blog Snaphanen argue that we should simply forget Breivik and ignore him. They’re missing the point. This is less about the deranged terrorist than it is about how he has been used by the mass media and political elites. […]

2. Why Egyptians Are Voting Away Their Freedoms

(In a nutshell, 90% of Egyptians want to ensure no Muslim Brotherhood control)

3. This is alleged to be a photo of a child in Syria, crucified while being forced to watch her parents being killed for being Christian. There is a trail of links I followed on this story and I have no idea if it is true. But it seems to me that it is no more outrageous or barbaric than what muslim monsters are doing in Syria on a daily basis to establish a sharia state.

Here are some of the links I have followed. 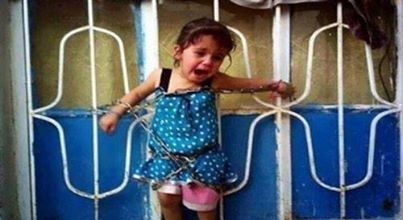 (This makes sense to me at the level of how muslims pretty much make their reputations on raising the bar of islamic observance. Its pretty much the only way you can make a living or gain authority etc. in that world. It won’t be by the arts or sports for certain. So I can see how they are starting to pass fatwas on fairly absurd behaviors as there just isn’t that much left that isn’t already forbidden. Maybe if women breastfeed the chair before they sit down though, they can consider it family and therefore sitting in it will be non-sexual somehow)

5. Brian Lilley on SUN TV segment on the Aikido and York U decisions to accommodate Islamic destruction of various other cultures.

6. ‘Blackphone’ claims to be NSA proof. Frankly, this sounds like a trap to me. There is no such thing as NSA proof as readers of this site will know, as they plant their own hardware and software into pretty much everything, even to the extent that they can spy on you when your camera appears to be off (some people are now in the habit of putting a band-aid over the lens when they are not using it) and even when your device is OFFLINE. The NSA will just look at people who buy this device as likely targets, in my opinion, and watch them more closely. Also I do not believe that this company will be able to resist NSA pressure. One man who tried to, had to close his secure email service as his options where grant access to the NSA or quit altogether. I suspect he paid a hefty price for his choice to live with integrity and obey the US 4th amendment.

7. Michael Coren on converts to Islam and Islam in general.

Thank you Oz-Rita, Fjordman, M, CB Sashenka and all.