To reach the heart of HM Prison Belmarsh is a bleak and time-consuming process. It means a thorough search at the gate, the issuing of a special biometric identity card, and a long, repetitive journey through successive electronic gates in the vast, brick-built perimeter and concentric layers of razor-wire fence. It is a journey down long, harshly echoing corridors to the centre of a maximum-security onion.

It is also an education in the technology of control – from control rooms linked to CCTV cameras scanning every cranny to the special BOSS (Body Orifice Security System) chairs that will sound an alarm if the person sitting in them has hidden a forbidden item – for example, a mobile phone – inside them.

It is at once unnerving and reassuring – reassuring because Belmarsh houses some of the most dangerous men in Britain. 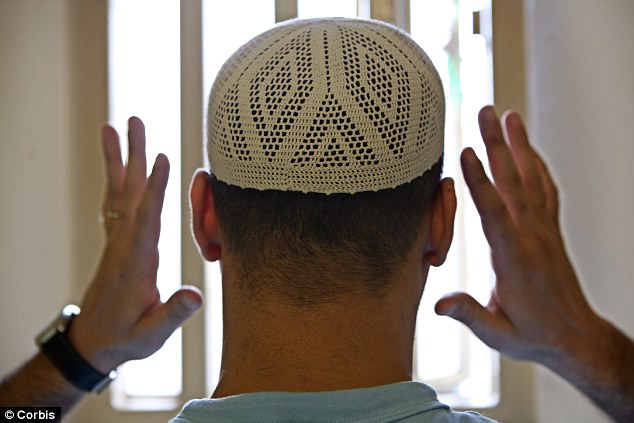 A Muslim prisoner prays in his cell. Nearly one in five prisoners at Belmarsh now claims Muslim allegiance

One of them is Abu Hamza, Britain’s least-loved prisoner. The one-eyed, hook-handed extremist Muslim preacher has been at the high-security prison for the past eight years.

He might well be leaving soon. He has already served a sentence for inciting terrorism and racial hatred and the European Court of Human Rights on Monday cleared the way for his long-pending deportation to America, where he faces further charges of involvement in a murder plot. (On Wednesday Hamza made an application against his extradition, the High Court temporarily barred it and his appeal is due to be outlined at a hearing early next week.)

Even while incarcerated, he is said to have tried to disseminate his poisonous message, both inside and outside the jail.

Few staff at the South-East London prison will mourn his departure, but the problem he came to symbolise will remain. To use Whitehall jargon, when Hamza leaves, about 110 ‘AQI’ (Al Qaeda-influenced) ‘TACT’ (Terrorism Act) prisoners will remain here and at other British prisons. Some of the hundreds of other Muslim inmates in our highest-security jails revere these figures and they are widely feared.

9 Replies to “Inside Britain’s terror cells: A chilling insight into how gangs of convicted terrorists recruit prisoners for Al Qaeda – and the courageous men and women sent in to ‘turn’ them”