It is a response to the German government that has actually been taking appropriate action against Islamic organizations bent on the destruction of the Autonomous German Republic.

The actions the German Government have been taken is represented in this German news clip below:

And here, the translation of the response from alghorabaa.wordpress.com

Abu Usama Al-Gharib: Statement on the raids (against salafists) in Germany

To the crusaders and Tawaghits: make as many raids as you want or can. Ban Millatu Ibrahim. Steal as much money, PC’s and anything else as you like. Kick as many doors as you want. Come masked like coward dogs, (or) as you like. Imprison and persecute us as best as you can. Spend millions putting us under surveillance…

In the end one thing remains unaltered:

We will not give up. Victory or Shahadah (Martyrdom). We will win, because Allah is with us. We will not stop saying: “We break with you, and first and foremost with those you serve instead of (serving) Allah. We declare you kuffars, and obviously PERPETUAL ENMITY and HATE reigns between you and us till you believe in no god but Allah. No one can ban Millatu Ibrahim, and neither (that) illusionist Friedrich Dirt Swine (German Interior Minister Hans-Peter Friedrich), because Millatu Ibrahim is in our hearts. Millatu Ibrahim is our way and our Aqida (faith).  We will keep on and you will lose. Your four and two legged dogs scare us not even a tiny bit. On the contrary, what your dogs do is an incentive for us to continue on this path.

No matter what you do or plan, we will continue saying that democracy is filth, dirt, filthier than swine shit, Shirk (idolatry or polytheism) and Kufr (not believing in Allah). We reject it (democracy) and we fight against it.

Your democracy is a Taghut (to worship anything except Allah), which we avoid and hate. Your democracy and your constitution are Wallahi (swear and affirmation word used in Egypt – “~verily”) less worthy than the toilet paper, they are under our shoe… no, we would not even step on them with shoes, one does not step on shit, because then the shoe will get dirty.

Your democracy is an idol, and in Islam idols are destroyed. This is what our prophets Ibrahim and Muhammad and after them our brothers the talibans did.

Do what you want… we will not give up loving our Mujahideens and to be behind… or even more, to be ahead of them. We will protect them with all means at our disposal…

Do what you want, we do not abandon our siblings, we will support them with all means at our disposal.

Do what you want, we just keep on…

Realize this for once and for all, you dogs, who are descendants of apes and pigs.

And Allah will fulfill his Light, even if the kuffar finds this loathsome. 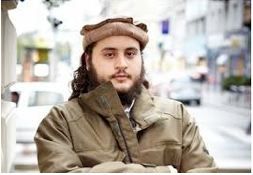 3 Replies to “Abu Usama Al-Gharib: Statement on the raids (against salafists) in Germany”