Britain really is broken or at least, breaking. 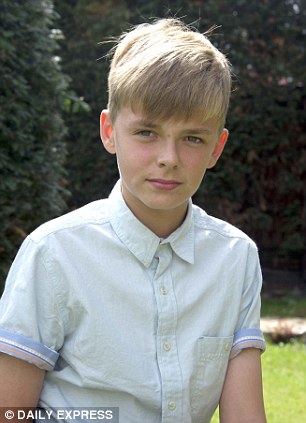 Rough justice: Oliver Pettman, 12, was shot in with the head with an airgun. When his father took the yob responsible to a police station, he was arrested

A businessman was arrested and held in a cell for seven hours after he frogmarched a yob to a police station for shooting his son with an airgun.

Stuart Pettman, 43, was furious after his 12-year-old son Oliver was surrounded by older youths and shot in the head, back and leg.

But after he spotted the boy responsible and insisted he accompany him to the police station, Mr Pettman was stunned to find he was being arrested himself a day later.

Police told him they were holding him on suspicion of assault and possessing a deadly weapon.

The boy he apprehended had made a complaint about him, and his car keys had been mistaken for a knife.

Mr Pettman, who runs an internet service for financial traders, said that officers had treated him ‘like a dangerous criminal’ by photographing him, taking his fingerprints and making him give a DNA sample.

Police have told him he will not be charged, but he has decided to move his family from their £800,000 detached home in Bexley, South London, to Singapore, where he is opening a new office.

Notice how there is no description of the shooter but there is this lower down:

Mr Pettman’s son Oliver said he was attacked after he was approached in Bexley’s Golden Acre Park by a group of youths, who accused him of being racist and demanded he kiss a teenager’s feet.

When he denied he was racist and refused to kiss the youth’s feet, he was shot three times.

16 Replies to “Father who took yob to police station for shooting his son, 12, in the head with airgun is arrested himself and kept in a cell for SEVEN hours”