Germany’s highest court made a landmark ruling today permitting armed soldiers to be deployed in the country for the first time since the days of the Nazis.

The Constitutional Court in Karlsruhe said armed soldiers could only be turned out in ‘exceptional cases to prevent threats to the state’ and never against demonstrators.

It also said the particular threat would have to be of ‘catastrophic proportions’ in order to get troops from their barracks and on to the streets with their weapons primed. 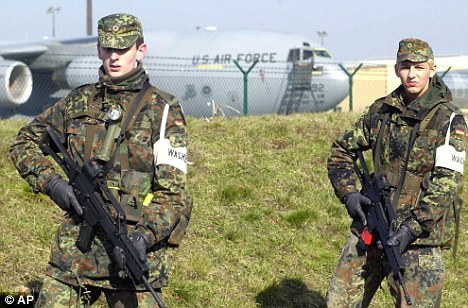 Ruling: German soldiers patrol the U.S. Airbase in Frankfurt.  A court has ruled armed soldiers  may now be deployed in the country for the first time since WWII

Neverthless, the decision is a watershed one for Germany. It was a central plank of both the occupying Allies in 1945, and later the German Constitution, that soldiers be kept confined to their training and parade grounds.

But although deeply pacifist since the catastrophic world wars of the last century, Germany has become more and more militarily engaged abroad since the 9/11 attacks and has a considerable detachment of servicemen currently in Afghanistan.