Police said they still did not know why… Imran Rashid, Raja Jeelani, Robuel Islam, and brothers Usman and Rizwan Ahmed murdered Serioza Lawskoski
Well I’m not Sherlock Holmes, but I think I found a clue. 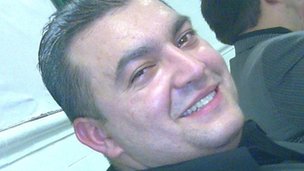 Five men have been convicted of murdering a Polish father of three who died after being hit with a hammer and kicked in a Derby street.

Police said they still did not know why the men from Derby attacked Serioza Lawskoski, 29, in Normanton last April.

Imran Rashid, 29, of Madeley Street, Raja Jeelani, 26, of Depot Street, Robuel Islam, 25, of Loudon Street, and brothers Usman and Rizwan Ahmed, 19 and 23, were found guilty after a trial.

They will be sentenced on Wednesday.

The men were also found guilty of conspiring to cause grievous bodily harm against Mr Lawskoski, along with a sixth man, 21-year-old Kamran Ahmed, of Northumberland Street, Derby.

Kamran Ahmed was originally charged with murder but this was dismissed during the trial.

Det Supt Andy Stokes, who led the inquiry, said: “This was a particularly challenging case because of the lack of apparent motive and limited initial evidence.”

In the same nine-week trial, Rashid and Jeelani were also convicted of conspiring to cause grievous bodily harm against 20-year-old Renato Blackwood, who was assaulted in St Mary’s Wharf Road, Derby, on 1 January 2011.

Nottingham Crown Court heard Mr Lawskoski, from Leacroft Road, Pear Tree, Derby, was confronted by the gang shortly after leaving a friend’s house in Cummings Street on the evening of 23 April.

The attack was unprovoked and Mr Lawskoski did not know the men.

Prosecutors said he was asked “what are you looking at?” before being hit with a hammer and then kicked in the head several times as he lay on the ground.

The court heard he may simply have been “in the wrong place at the wrong time”.

He was found lying unconscious in the street and was taken to the Royal Derby Hospital where he was pronounced dead.

Mobile phone analysis showed the gang had texted and called each other before going to Cummings Street.

In a statement, Ludomier Krakowiak, Mr Lawskoski’s father, said: “Serioza was a good son, husband and father to three children. He loved life and people loved him. He was a keen musician and singer, we are all heartbroken at his loss.”

Mr Krakowiak said his son came to the UK from Poland in 2004 to work to support his family.

“Our hope is that nothing of this nature happens to anyone else; the worst thing that can happen to anyone is to lose your own child,” he added.

“We hope that no other family has to suffer and go through what we have.”

6 Replies to “Five “men from Derby” murder a Polish father of three.”