muslims protesting because the court wont convict some rioters for killing their 3 of their muslim scum brethren who were throwing bricks and jumped in front of cars, why the hell would they stop, so they could be lynched? So look at these protestors, they look like ordinary muslims, not extremists, but listen to what they are demanding. 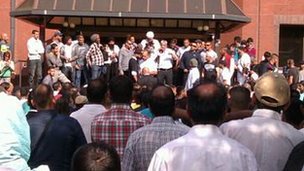 Up to 300 people gathered outside West Midlands Police’s headquarters to protest after a trial over the deaths of three men during the summer riots.

Haroon Jahan, 20, and brothers Shazad Ali, 30, and Abdul Musavir, 31, died in Birmingham in August 2011 after being hit by a car in Winson Green.

All eight defendants denied they planned to kill the men in a co-ordinated attack using three cars.

Appealing for calm, Haroon Jahan’s father Tariq Jahan, said the community had to be “unified and organised”.

“It has to be a mental fight not a physical fight,” he said.

“We need to get justice for three innocent guys who died for their community.”

Abdul Quddoos, the brother of Shazad Ali and Abdul Musavir, said the families who are protesting wanted answers.

The three who died were part of a group of about 80 men who had gathered to defend local businesses after riots and looting had started in the Handsworth area. 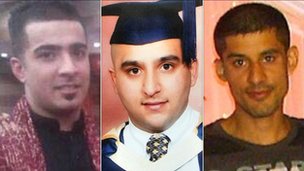 The crowd outside Lloyd House, the police headquarters, hung up a banner which read: “We want justice for Allah’s three innocent soldiers.”

Relatives of the three men made speeches and one member of the crowd said the men’s deaths had had a “devastating impact” on the community.

The mother of Haroon Jahan said she had been given assurances throughout the year that there would be justice for her son, but she felt that this had not happened.

She said what had happened to her son could happen to anyone.

After gathering outside Lloyd House the crowd made their way towards the law courts nearby before dispersing.