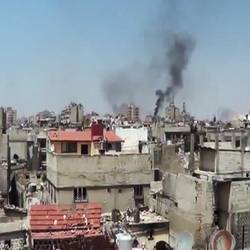 Bombings in the city of Homs

An exodus of Christians is taking place in Western Syria: the Christian population has fled the city of Qusayr, near Homs, following an ultimatum issued by the military chief of the armed opposition, Abdel Salam Harba.

This is what local sources told Vatican news agency Fides, pointing out that since the conflict broke out, only a thousand of the city’s ten thousand faithful, were left and they are now being forced to flee immediately. Some of the city’s mosques have issued the message again, announcing from the minarets: “Christians must leave Qusayr within six days, ending Friday.” The ultimatum therefore expired on 8 June and spread fear among the Christian population which had started to regain hope as a result of the presence of the Jesuit Fr. Paolo Dall’Oglio, who stopped off in Qusayr for a week to “pray and fast in the name of peace, right in the midst of conflict.”

The reasons for this ultimatum remain a mystery. Some say it is necessary in order to protect faithful from further suffering; other sources reveal “a continuity in discrimination and selective repression.” Others still claim that Christians have openly expressed their loyalty to the state and this is why the opposition army is chasing them away. Now Christian families in Qusayr have begun their exodus as displaced persons, towards the surrounding valleys and rural areas. Some have taken refuge in parents’ and friends’ homes in Damascus. Very few families have courageously decided to stay behind in their birth city but who knows what fate will meet. Fides sources have reiterated that groups of Salafi Islamic extremists within the armed opposition consider Christians as “infidels”; they confiscate their belongings, carry out mass executions and are ready to declare a “denominational war”.