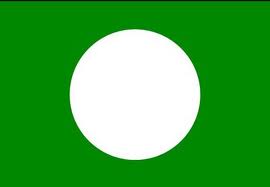 Flag of the Pan-Malaysian Islamic Party.

In the latest incident of cultural cleansing, a Malaysian Buddhist society, in the city of Kota Bharu, is being forced to build its new temple to look like a mosque.

Despite 30% of the inhabitants being Buddhist and Christian, the Malaysian city of Kota Bharu was declared to be officially Islamic in 2005 by the Parti Islam SeMalaysia, or Pan-Malaysian Islamic Party (PAS).

Since Then the Kota Baru Municipal Council (KBMC) has instituted a number of sharia laws in an attempt to Islamize the public space.

Due to a provision introduced by PAS, which heads the state government the Kelantan Buddhist Association is now being “forced to comply with Islamic regulations for their building’s design,” reports the Malaysian Chronicle.

According to the Chronicle, the temple’s “windows must contain Islamic features and cylindrical-shaped domelike shapes. The provision has denied the unique… read more.