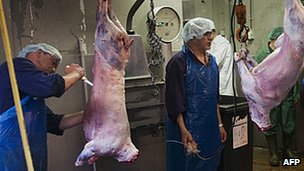 Prof Reilly says if there is no alternative to non-stun slaughter, then it ought to be kept to a minimum
Continue reading the main story

A leading vet has criticised the “unacceptable” rise in the number of animals killed in ritual slaughter.

Ritual slaughter is lawful in the UK and the EU to satisfy the dietary requirements of Jews and Muslims.

The Food Standards Agency (FSA) said its own figures showed most animals were stunned before being killed.

The FSA conducted a survey into animal welfare in slaughterhouses in September.

A spokesman said: “The results indicate that the number of animals not stunned prior to slaughter is relatively low, accounting for 3% of cattle, 10% of sheep and goats, and 4% of poultry.

“They also show that the majority of animals destined for the halal trade in both the red and white meat sectors are stunned before slaughter.”

The FSA said full details of the survey would be published ahead of a discussion at a board meeting on 22 May.