Some things take longer than others to do obviously. Making an original video requiring research and proper vetting can take up hours, weeks or months and even years.

I have not been able to post as much material to this site as I would have liked to for the past many weeks as I have been working both on video projects of my own (no fear, all counter-jihad related) as well as assisting other people who have been doing utterly fantastic and important work.

In 2009, when I saw newly-elected president Obama’s speech in Cairo co-sponsored by Al-Azaar, I made a mental note that some day I must do some sort of critical analysis of what I heard as much of it was, to say the least, frightening and possibly outright dishonest. At worst, enemy propaganda, although I suspect it is more likely an insulting attempt to curry favor with the Islamic world. Insulting because anyone knows when they are being lied to even by way of flattery.

I had back-burnered this idea as I knew it would take a lot of research, time and effort. Two of those things I just do not have in abundance.

Then, Geert Wilders excellent book, ‘Marked For Death’, came in the mail.

The introduction is by Mark Steyn, and as one expects from him, is honest, insightful, amusing in a way that tries to hide the raw horror of the subject at hand, and entertaining. The book itself is a combination of autobiography and analysis of Islam and its interaction with the Western world. At least so far. For full disclosure here, I have not finished it all yet, but will within the next couple of days. However I have found it so motivating and thorough, and that Geert had kindly done the exact work I needed for my procrastinated video-project, that I started dog-earing it and doing the analysis.

So I dedicate this video to Geert Wilders. A man I have had the privilege of meeting and speaking with in person, and who has sacrificed a great deal in the long-shot attempt that the rest of us may preserve some of the freedoms we have now, and hope-against-hope, get back some of the ones we have already lost. 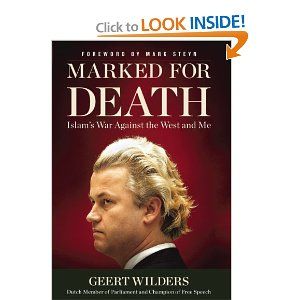 I realize that most people who read this site would not find much novelty in any counter-jihad book. But please buy Geert Wilders new release. Not just because it is a way of putting a small amount of cash into the hands of one of the Western World’s potential saviors and who urgently needs, and deserves it, but because it is a really great book and a fantastic read.