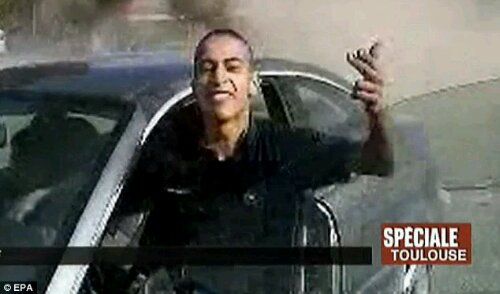 An outrage beyond words. A self-confessed Al Qaeda terrorist thought to have murdered seven people across south west France over the past two weeks was going to post footage of his crimes online today, he claimed.

Mohammed Mera, 24, told news channel France 24’s editor Ebba Kalondo at 1am this morning he had ‘filmed everything’ with a small video camera and ‘intended to put the videos online’.

But just two hours later more than 300 armed police dramatically raided his Toulouse home – where three officers were injured – and he is now cornered and under siege.

He has been described as ‘armed and dangerous’ with a cache including an Uzi machine gun and Kalashnikov assault rifle, with police saying he is likely to kill again. 1110: Reuters report that the suspect had been serving a three year sentence when he escaped from jail, quoting the director of Kandahar prison.

1105: According to Reuters news agency, the head of Kandahar prison in Afghanistan, says the suspect Mohammed Merah, escaped from the prison in a mass Taliban jailbreak.

1102: A man who claimed to have carried out the shootings telephoned France’s continuous news channel France24 before the police raid. According to one of the channel’s editors, he claimed to have filmed Monday’s attack on a Jewish school in Toulouse and planned to put the film on the web. You can see an interview with the France24 editor, in French, on YouTube.