I thought I would post this little set of rules about music as a partial answer to two questions which people seem to wonder about consciously or not, and out loud or not.

The questions of course are:

Are Muslims the new Jews, or the new Nazis?

Which cultures are more similar? The semitic ones of Islam and Judaism? Or Nazism and Islam?

First, lets look at the rules for music under the Nazi regime in the 30s and 40s.

1 Pieces in foxtrot rhythm (so-called swing) are not to exceed 20% of the repertoires of light orchestras and dance bands;

2 in this so-called jazz type repertoire, preference is to be given to compositions in a major key and to lyrics expressing joy in life rather than Jewishly gloomy lyrics;

3 As to tempo, preference is also to be given to brisk compositions over slow ones so-called blues); however, the pace must not exceed a certain degree of allegro, commensurate with the Aryan sense of discipline and moderation. On no account will Negroid excesses in tempo (so-called hot jazz) or in solo performances (so-called breaks) be tolerated;

4 so-called jazz compositions may contain at most 10% syncopation; the remainder must consist of a natural legato movement devoid of the hysterical rhythmic reverses characteristic of the barbarian races and conductive to dark instincts alien to the German people (so-called riffs);

5 strictly prohibited is the use of instruments alien to the German spirit (so-called cowbells, flexatone, brushes, etc.) as well as all mutes which turn the noble sound of wind and brass instruments into a Jewish-Freemasonic yowl (so-called wa-wa, hat, etc.);

6 also prohibited are so-called drum breaks longer than half a bar in four-quarter beat (except in stylized military marches);

7 the double bass must be played solely with the bow in so-called jazz compositions;

8 plucking of the strings is prohibited, since it is damaging to the instrument and detrimental to Aryan musicality; if a so-called pizzicato effect is absolutely desirable for the character of the composition, strict care must be taken lest the string be allowed to patter on the sordine, which is henceforth forbidden;

10 all light orchestras and dance bands are advised to restrict the use of saxophones of all keys and to substitute for them the violin-cello, the viola or possibly a suitable folk instrument.

From these rules it is clear that the Nazis felt music was not just OK, but is extremely important. So much so, that all kinds of (presumably) very harsh punishments would occur if one would, for example, perform Django Reinhardt‘s classic, ‘Minor Swing’. Not only was the entire piece in swing rhythm (foxtrot?) but it was written and played by a Gypsy, it is in a minor key, the violin is bowed but the scales would have been unacceptable (possibly Byzantine?) so several violations of the Nazi rules. But it wasn’t so much that the Nazis hated Music, they hated anything that directed people to other than Nazi ideology.

Now let’s have a look at some Islamic rules/fatwa’s on the enjoyment or playing of music. 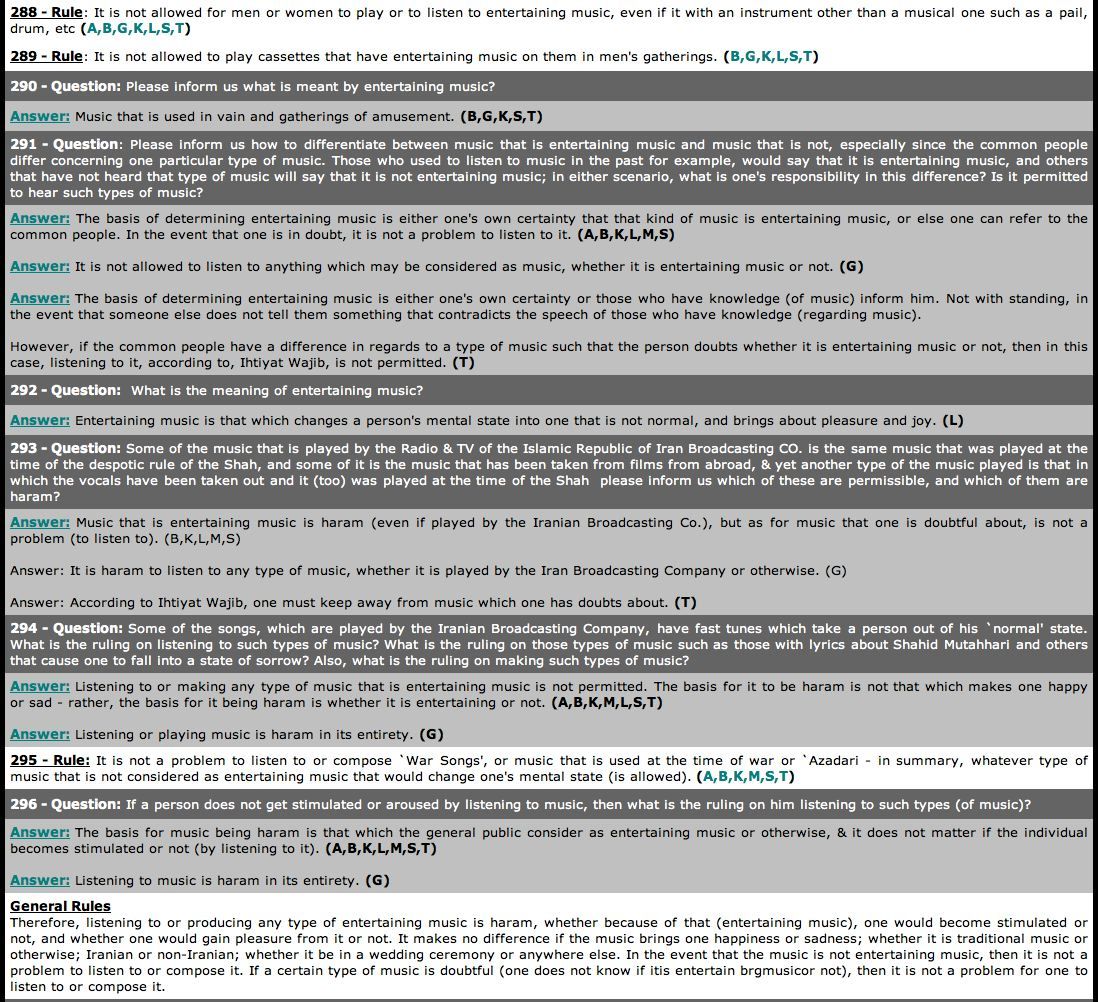 Here is an article by Said Qutb, one of the most influential writers of modern Islamic thought. He is in some ways, the patron saint of the Islamic Brotherhood as well as Al Queda, and he he was Osama Binn-Laden’s favorite author.

Said Qutb: On the Arts in America

The American is primitive in his artistic taste, both in what he enjoys as art and in his own artistic works.

“Jazz” music is his music of choice. This is that music that the Negroes invented to satisfy their primitive inclinations, as well as their desire to be noisy on the one hand and to excite bestial tendencies on the other. The American’s intoxication in “jazz” music does not reach its full completion until the music is accompanied by singing that is just as coarse and obnoxious as the music itself. Meanwhile, the noise of the instruments and the voices mounts, and it rings in the ears to an unbearable degree… The agitation of the multitude[2] increases, and the voices of approval mount, and their palms ring out in vehement, continuous applause that all but deafens the ears.

So it is fairly easy to see even from a cursory review of these rules,that Islam also will not tolerate any music that is distracting from its totalitarian ideology. It is also clear from this list that Nazis are relative teddy bears (so long as they aren’t named Mohamed of course) when it comes to tolerance of music and some things that are actually enjoyable. The Nazi rules in fact, were to emphasize the joy in music while Islamic rules are to eliminate it altogether. Of course the previous statement in no way is meant to endorse the Nazi rules, or to suggest they were right minded in any way. Just that the intention of them is many times more palatable in intent than are the Muslim ones in as much as the intent is to allow music at all, and increase the joy of it as Nazis see it.

Of course, to compare either of these to jewish rules either religiously, culturally or in the actual world of music would be pointless. The number of Jewish songwriters and performers who have contributed to the cannon is staggering. Even many of the most famous Christmas carols have been written by Jewish composers as was much gospel and Motown.

Clearly the totalitarian impulse requires that all arts be directed towards that ideology, or crushed altogether in order to centralize power. The Islamic one would appear to be considerably more draconian than even the Nazis.

3 Replies to “Songs in The keys of M and N. a musical comparison.”

Leave a Reply to An EDL Buck Cancel reply