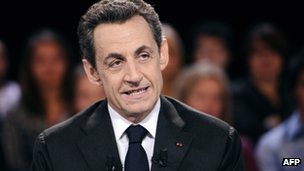 In a TV debate, Mr Sarkozy defended his plan to cut the number of new arrivals in half if he is re-elected next month.

Mr Sarkozy is trailing in the opinion polls behind the Socialist candidate Francois Hollande.

He is also competing for conservative voters with the far-right National Front party led by Marine le Pen.

The latest opinion poll published on Tuesday by CSA showed Mr Hollande widening his lead over the president.

It also suggested that the Socialist leader would win decisively by 54% to 46% in a second round of voting on 6 May.

6 Replies to “Nicolas Sarkozy says France has too many foreigners”