Voice of the Copts: 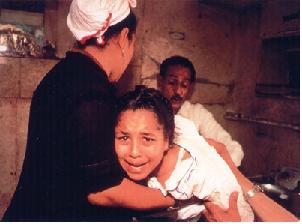 “Of course she must be circumcised,” said Olla, referring to the timid 11-year-old girl sitting beside her.

I asked Olla if I could find out from the child herself, her daughter Raaja, who sat shaking with fear, what she thought.

“There is no need to ask her,” her mother declared. “She doesn’t understand what we are talking about.”

I thought that unlikely. We were sitting in the family room of a two-storey house in a village in Upper Egypt. Besides Olla and her daughter, Raaja, present were her mother-in-law, who nodded approvingly at everything she said, and three young teenage girl cousins.

What else would the girls talk about when they were alone but that single event that can traumatise them for life – the dread of the inevitable, the incomprehension as they are held down by mothers, aunts and grandmothers, the indescribable pain as the midwife takes a blade to the clitoris.

Astonishingly, in 21st Century Egypt, the latest figures suggest that more than 90% of the women have been subject to female genital mutilation (FGM). The figure comes from a Unicef approved survey carried out in 2008, the year that the practice was banned.

A new set of figures are due to be published later this year and doctors expect them to show a 10% decline. That still leaves the majority of women in Egypt exposed to unimaginable physical and psychological pain and denied what the rest of us would call a normal sex life.

4 Replies to “Female genital mutilation rife in Egypt despite ban”