I hope all those guys open like, the most fabulous restaurants! Check your bill carefully though.

Universities are dropping maths from degree courses because students – and their lecturers –  cannot cope with it, a report warns today.

Decades of substandard maths education in schools has led to a ‘crisis’ in England’s number skills, threatening the future of the economy, it says.

Universities are being forced to dumb down degree courses requiring the use of maths, including sciences, economics, psychology and social sciences. 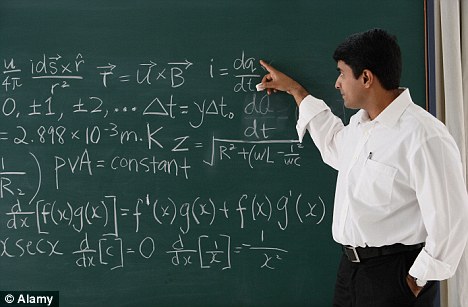 Maths crisis: Universities are being forced to dumb down degree courses which require the use of maths because students can’t keep up

Students are unable to tackle complex problems and their lecturers struggle to teach them anyway, it is claimed.

The reputation of the country’s universities and graduates is now under threat, according to the report, ‘Solving the Maths Problem’, published by the education lobby group RSA.

After looking at maths education in other countries, the authors found that lessons and qualifications in English schools were ‘not fit for purpose’.

They say that classes fail to stretch the brightest while leaving weaker pupils ill-equipped to use maths for work and family budgeting, and warn of a growing knock-on effect on universities.

11 Replies to “Maths ‘too hard for students and dons’: Universities drop subject from science courses”