He said his wife was among those killed. Ten other people were injured.

Nigeria has recently experienced a surge in ethnic and sectarian violence. The government declared a state of emergency in parts of the country.

“The attackers started shooting sporadically. They shot through the window of the church, and many people were killed including my wife,” Mr Jauro told Reuters news agency.

“Many members who attended the church service were also injured.”

No group said it carried out the attack, but the Islamist group Boko Haram recently carried out a string of bombings on Christmas Day, including against a church in the capital Abuja which killed dozens of people.

Earlier on Thursday, two suspected members of Boko Haram were arrested after a father and son were killed in Maiduguri in neighbouring Borno state.

Attacks by Boko Haram have become increasingly frequent and are a major problem for the Nigerian authorities. 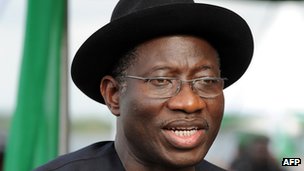 President Goodluck Jonathan has vowed to “crush” the group.

Several northern states surrounding Gombe have had their borders sealed off under the state of emergency declared by Mr Jonathan following the Christmas bombings.

Boko Haram is fighting to create an Islamic state and wants to impose Sharia law across Nigeria.

Followers of Boko Haram believe any political or social activity associated with Western values should be banned.

This includes voting in elections, wearing shirts and trousers and receiving a secular education.

Boko Haram regards the Nigerian state as being run by non-believers and this was the case even when the country had a Muslim president.

In unrelated violence on Sunday, at least 50 people died in the eastern state of Ebony in clashes between two ethnic groups over a land dispute.

One Reply to “Nigeria church hit by deadly gun attack”