The pyramids at Giza are the most stunning sight I have ever seen.

True, their lonely eminence is threatened by Cairo’s unlicensed building sprawl, with half completed houses inching their way towards them.

Surveying them at night as the calls to prayer multiplied into a thunder of sound from central Cairo already told me a few years back what was coming. 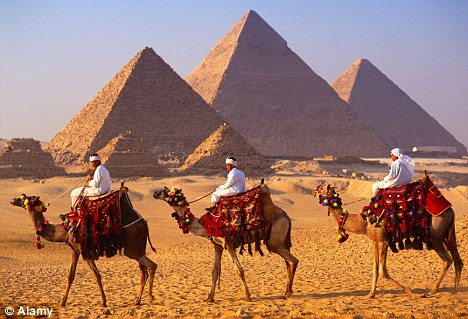 Wonder: The Pyramids at Giza are under threat from destruction or ‘concealment’ by covering them with wax

For now members of the Nour (The Light) Salafist party, which won 20 per cent of the vote in recent elections, are talking about putting an end to the ‘idolatry’ represented by the pyramids.

This means destruction – along the lines essayed by the Afghan Taliban who blew up the Banyam Buddhas – or ‘concealment’ by covering them with wax. Tourists would presumably see great blobs rather than the perfectly carved steps.

This last suggestion was made by Abdel Moneim Al-Shahat, a Nour candidate for parliament. Apart from wanting to do away with this ‘rotten culture’, this gentleman also wants to ban the Nobel prize winning novels of Naguib Mahfouz, one of many great Egyptian writers.

I suppose they could call in the great Bulgarian artist Christo, who specialises in putting curtains across the Grand Canyon or surrounding Pacific atolls in fetching pink cloth? But I doubt they have heard of him. 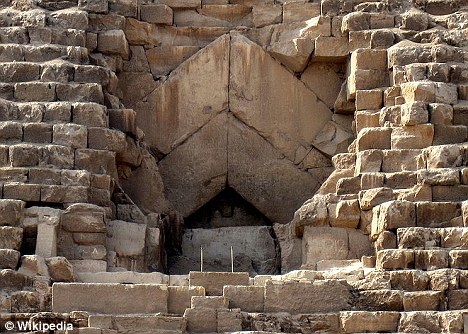 Grand: Today tourists can go into the Great Pyramid via the Robbers’ Tunnel dug by workmen employed by Caliph al-Ma’mun around AD 820 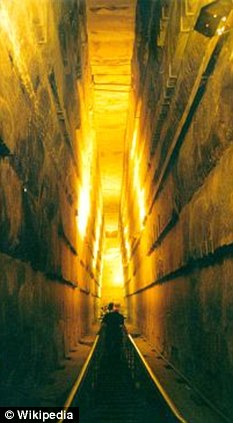 Beautiful: The Grand Gallery of the Great Pyramid

Salafism means reverting to the mores of the founding generation of Islam, for the close companions of the Prophet were called Salafi meaning ‘pious founders’. Since the last adherent of ancient Egyptian religion allegedly converted (to Christianity) in the fourth century AD, the original Salafists had little to worry about the pyramids and left them alone.

But not their 21st century successors, who also want what they call ‘halal’ tourism, with women told to dress decorously and no alcohol, something pretty general already in conservative Egypt. The Salafists want segregated beaches, which will not go down well with visitors to Sharm el Sheikh.

Tourism accounts for 11 per cent of Egypt’s $218billion GDP. Right now, hotels and resorts report falls in occupancy from 90 to 15 per cent.

This is bad news for the 3million Egyptians who depend on the 14million tourists who visit Egypt each year. The people affected are not simply waiters and chambermaids, but taxi drivers, camel and horse ride touts, shop and stall owners and ordinary villagers who make a bit on the side providing tea and snacks for Nile cruises.

One of the great tragedies of what is afoot in the Middle East is the extinction of the last vestiges of a vibrant, cosmopolitan culture, as represented by another great Egyptian novelist, the Cairo dentist, Alaa Al Aswany, author of the remarkable Yacoubian Building.

It is becoming hard to recall that in the 1950s – under King Farouk – Egypt had a thriving film industry, producing 300 movies a year, and that its national chanteuse, Umm Kulthum, was worshipped throughout the Middle East.

But now the fanatics are in the saddle, so its good bye to all that. We’ll have to wait for fundamentalism to fail, as Nasserite ‘national socialism’ did before it. For Nour and the like surely have no answers to the problems of contemporary Egypt.

6 Replies to “The Salafist party’s plan for the Pyramids? Cover them in wax”