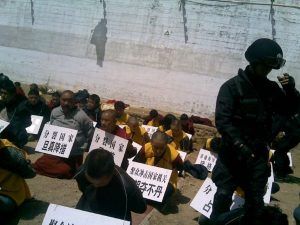 At least 12 Tibetan monks and nuns have set themselves of fire, in acts of self-immolation, this year, in protest against the increasing oppressiveness of the Chinese Government. However, the world has remained virtually silent on the issue.

Speaking from said in Dharmsala, India, Prime Minister Lobsang Sangay of the Tibetan Government in Exile said, “The human rights situation in Tibet has deteriorated so significantly that Tibetans are resorting to desperate and unprecedented acts.”

Prime Minister  Sangay  added, “to the government of China, we want to say that the only way to bring about real peace and stability in Tibet is by respecting the fundamental human rights of the Tibetan people.”

FreeTibet has called the wave of self-immolations “an unprecedented trend which underlines a fundamental rejection of China’s occupation.”  The organization which campaigns for Tibetan independence and human rights for Tibetans says that “most of the self-immolations have been followed by a harsh crackdown by Chinese authorities which has included the deployment of paramilitary, police or security forces, arbitrary arrests, house searches, lengthy prison sentences and the removal of hundreds of monks.”