part of the article from: 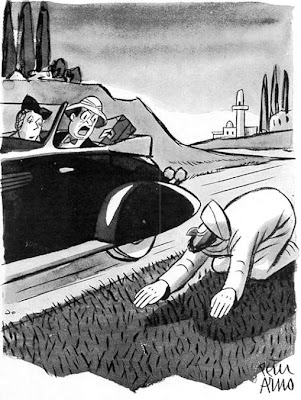 “Hey Jack, which way to Mecca?”

Having written countless columns and blog posts arguing that the see-no-Islam counterinsurgency strategy (COIN) has led to failure in two wars in the umma and the dhimmification of the U.S. military, it’s almost funny to see the debate more or less officially joined over my recent column on what appears to be simply the gross-out, PG-13 movie topic of peeing toward Mecca. Or, rather, not peeing toward Mecca.

The latter is the lesson that an Afghan Muslim contractor has been teaching Marines before they deploy to Afghanistan, in accordance with an Islamic canonical hadith called “The Prohibition of Facing the Qiblah When Relieving Oneself.” But maybe the debate had to take this excretory turn with the Pentagon awash in the phony fundamentals of Greg Mortenson’s discredited “Three Cups of Tea.”

Scatological or not, what we are talking about here is an untenable invasion of privacy of American citizens in uniform via religious dictate as taught by the U.S. Marine Corps.

The Nov. 28 print edition of Marine Corps Times carries both an article and a lead editorial on what the paper is politely calling “excretory etiquette” regarding Marines and Mecca – which, incidentally, is about 2,000 miles from Afghanistan. But this isn’t just about etiquette. Given its Islamic religious derivation, the Marines’ excretory instruction strikes me as a violation of religious freedom. Who is the U.S. Marine Corps to instruct American citizens to bring their personal hygiene practices into accord with Islamic law? The Corps in this case is acting as a vehicle of Islamic law, which comprehensively rules on all manner of personal habits, as well as on civil and legal affairs.

Needless to say, the Marine Corps doesn’t see it that way. Its spokesmen have contended narrowly that this lesson taught by a contractor (hired by the Corps) isn’t “formal Marine Corps doctrine,” as the Marine Corps Times editorial puts it. Formal or not, the editors also don’t think this Marine Shariah (Islamic law) is a bad idea. Headlined “Respect differences,” the editorial states: “Thing is, there’s value to this sort of insight.” Perhaps in the name of respecting “differences”?

Heavens, no. This is all about respecting Islam, not “differences.” After all, if it were about “differences,” the respect in question would extend to the non-Islamic belief that not all bodily functions taking place on planet Earth must key off the location of a town in Saudi Arabia. To each his own.

That’s not the editorial’s subject. The value, it says, comes “in light of the tense conditions under which both groups must coexist.”

Tense conditions – as in border firefights? Roadside bombs? No, again. The editorial refers to tensions between Muslims and infidels inside the wire. “Consider that in the last four years,” the editorial continues, “nearly 60 coalition troops have been killed by their Afghan counterparts.”

Please click through for the rest of this article.

4 Replies to “It May Not Be “Formal Doctrine,” But the Marine Corps Is Teaching Islamic Law”